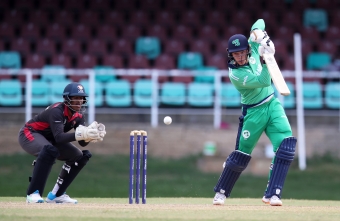 Ireland went down today, but exceeded many people's expectations at the tournament

PORT OF SPAIN, Trinidad – An exceptional bowling display by a spin-heavy UAE side overcame a tiring Ireland side to win the Plate Final of the ICC Under-19s Men’s Cricket World Cup at the Queens Park Oval today.

Already equalling the best-ever finish by an Irish side in the Under-19s World Cup tournament – and having already achieved automatic qualification through final ranking to the next Under-19s World Cup – Ireland were brushed aside by a UAE side that had convincingly beaten West Indies in their last match and looked full of confidence going into today’s clash. For the Irish, this was the last match of a more than month-long tour, having departed Ireland over a month ago. The young side has played 12 matches in that time, often in 30-plus degree heat, and the experience will undoubtedly be to their advantage as they develop as senior cricketers in coming years.

After winning the toss today and choosing to bat first, Ireland weren’t able to repeat the batting heroics of their last match, succumbing for just 122 in the 46th over. Instonians’ Jack Dickson top-scored for the second game straight, today hitting 40 from a patient 83 balls, with a four and two sixes.

The Irish were seeking a partner to stick with Dickson to build a partnership, but regular wickets fell with the domination of the UAE’s spinners making it difficult for the batters to get a start. Philippe le Roux (14), Scott Macbeth (15), Liam Doherty (13) and Jamie Forbes (11*) got starts, but ultimately the Irish side failed to mount a sizeable enough total to defend. The UAE batters, led by Kai Smith (49) and Punya Mehra (48*), took control of the run-chase and cantered to an eight-wicket win, claiming the UAE’s first piece of silverware at an international tournament.

The Irish side may have been beaten today but should remain unbowed. An unfancied squad by many at the outset, the young side went on to win three of their six tournament matches and finished the tournament’s 10th ranked side – the equal-highest position that Ireland has finished in this tournament’s history. While they may have initially dreamed of getting through the Group to the Super 8 stage, the side quickly regrouped after losses to India and South Africa to convincingly win consecutive Plate matches against Canada and Zimbabwe.

Not only can the squad leave the tournament with pride regarding their eventual ranking outcome, there were several players whose performances caught the eye – Josh Cox’s century against Uganda, Muzamil Sherzad’s 5-20 against Zimbabwe, Jack Dickson’s 78* and 40 in the last two matches, Philippe le Roux’s 83* against Canada, and Matthew Humphreys’ 12 wickets being just a few stand-out moments that Irish fans can reflect on fondly.