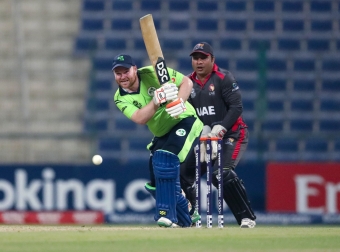 After losing the toss and being sent in, openers Paul Stirling and Kevin O’Brien looked to hit out early on what was a harder batting wicket than yesterday. After hitting two boundaries, O’Brien (14) fell to a diving catch at mid-wicket by Ashfaq Ahmed, bringing the in-form Andy Balbirnie to the crease.

Stirling and Balbirnie looked to back up their 86-run stand yesterday with another performance here, however, on this occasion they could only muster 29 between them. Balbirnie was again looking confident until he fell to a neat catch for 11. Two further wickets fell as the batting became difficult in no small part thanks to tight spin bowling deployed by the home side, and suddenly Ireland was precariously poised at 68-4.

Stirling needed a partner to stay with him, and Mark Adair seemed the man. The pair put on a patient 52-run stand, which was more a partnership of turning the strike over than striking boundaries.

Stirling brought up his 15th career half-century off 47 balls, and was looking to bat the innings out. However, after getting to 72 from 58 balls, Stirling was called through by Adair for a tight second run and was caught just short. Stirling is now ranked fifth in the world for batters who have scored the most half-centuries in T20I cricket, and he has scored seven half-centuries this year alone from just 14 innings.

Stirling’s dismissal was the beginning of an end-of-innings collapse that saw an incredible 6 wickets fall in the last 9 balls, with Ireland finishing all out for 125.

For the UAE, Rohan Mustafa bowled an excellent 4-18 from his four overs, the former UAE captain’s best bowling figures in T20Is.

In response, the UAE made run-scoring look easy, blasting 32 runs from the first two overs. Rohan Mustafa (39 from 16 balls) was the early destroyer, until his stay was cut short, beaten for pace by David Delany and has his stumps rattled.

The run rate continued to tick over at 9 runs an over, with Ireland’s captain Gary Wilson rotating his bowlers to try make the breakthrough. Boyd Rankin slanted one across the left-handed Mohammad Usman (29) and had him caught behind, and Harry Tector created two late run outs through great fielding at point in the latter overs, but in the end the Irish total proved too low to defend and the UAE ran out winners by five wickets. Image: Rohan Mustafa was named Player of the Match

“We felt batting was difficult. Paul [Stirling] is one of the best ball strikers in world cricket and he was telling us it was difficult going. But obviously when Rohan [Mustafa] comes out and plays like that it kills the game. I thought we bowled relatively well after that, but as I said, I thought he killed the game by getting UAE off to a great start.”

“I thought the UAE bowled very well, they knew the conditions well, which certainly helped them, but hopefully we’ll come back strong in a couple of days against Oman. Of course, there are areas of our game that need to be better, but credit must go firstly to the UAE boys for the way they played.”

Ireland now have a day’s rest before returning to action on Monday against Oman.