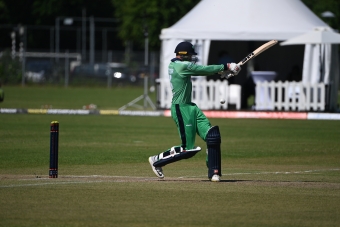 UTRECHT, Netherlands – A resurgent Dutch side came back from their eight-wicket mauling in Game 2 to record a comfortable four-wicket win over Ireland in the third and final ODI of the series at SV Kampong in Utrecht today.

Ireland captain Andrew Balbirnie won the toss for the first time in the series, and chose to bat. However, just three overs in and Ireland may have wanted to reconsider their decision, with Kevin O’Brien – recalled to the team in place of William Porterfield – bowled for a duck, and talisman Paul Stirling edging behind for 5. Balbirnie and Harry Tector sought to stabilise the innings, but with the score on 28 it was Balbirnie who lost his wicket, playing back to a ball that kept low and losing his middle stump, out for 13.

Desperately needing a partnership, Tector and George Dockrell obliged, with the pair putting on 89 for the third wicket – somewhat surprisingly the highest partnership of the series for both teams. The pair played without fuss, turning the strike over regularly, punctuated by periodic boundaries – especially some textbook cover drives from both batters.

Looking to accelerate the scoring, Dockrell was bowled unluckily for 40 when a ball from Logan van Beek pitched on a good length but virtually ran along the ground, hitting his off stump.

Harry Tector brought up his maiden ODI half-century from 86 balls – an innings of calm and measured batting, but uncharacteristically his fifty came up by charging the bowler and feathering the ball through to the keeper Scott Edwards. Edwards, however, appeared not to pick the ball up until late and missed what should have been a routine catch with the ball running away to the boundary behind him.

Tector, though, fell soon after for 58, leaving Ireland at 128-5 in the 37th over. In the final analysis of the match, van Beek’s removal of both Dockrell and Tector dramatically swung the momentum of the match, from which Ireland never recovered.

Needing a lower order resurgence, the Irish batters suddenly found runs hard to come by and the wicket playing its part with increasingly uneven bounce. They lost their last 6 wickets for just 37 runs, and were all out in the 50th over for 163.

Requiring early wickets in the return innings, the Irish bowlers watched as the Netherlands batters rode their luck early. A six off the first ball set the tone, as Player of the Match Stephan Myburgh (74) and Max O’Dowd (36) set to work chasing down the target. While the pitch continued to show some inconsistent bounce, the Dutch openers put on 66 for the first wicket to put the home side in charge.

A switch from the pace bowlers to the spin of Simi Singh produced the first wicket of O’Dowd, followed by Barry McCarthy removing Scott Edwards in the next over, but a 29-run stand for the third wicket settled any possible nerves in the Dutch camp.

While a four further wickets fell, the Dutch completed the run chase comfortably to win by four wickets with 25 balls to spare.

Andrew Balbirnie said after the game:

“The wicket didn’t misbehave as much as we thought it may throughout the day. We got through to a decent period with the bat, and we looked like we could have scored 200+, until the momentum of the match was snatched away from us by Logan van Beek. It’s just really disappointing – there were a lot of big moments throughout the week that we just didn’t win and the Dutch did. Hats off to them, they deserved to win two games out of three, and we go home with 10 points, and that’s the way it is.”

“[Losing 7-46] was hugely crucial, particularly on a wicket where you had to spend time to get in and scrap your way to a score. We had built a good partnership with George and Harry and were in a commanding position, but when you’re three down for not a lot again, you’re in trouble. It’s been a difficult week for us, we’ve been really disappointed we haven’t adapted to tough conditions, but no excuses there. The Dutch had the same pitch to play on – but that’s challenge with the Super League, we’ve got to go to places where conditions aren’t familiar and learn to adapt, but we didn’t this week.”

“There’s no excuses from us – we came here to win games of cricket and we didn’t win them. We didn’t win the big moments and dropped a catch in the first 10 overs that may have made a huge difference. We’ll take our 10 points and go with what we have – we’ve two big series coming up at home, so we’ve got to turn it around and put it right. We’re confident we can pick up points but that requires us being more consistent – which we’re not doing.”