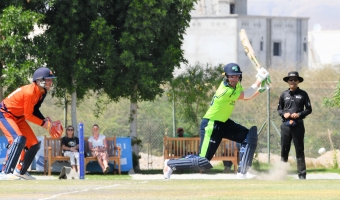 Ireland captain Gary Wilson won the toss and chose to bowl first. The Dutch batters started sprightly, finding themselves at 69-1 in the 7th over before Max O’Dowd (38) was run out in a clever piece of fielding by Mark Adair and George Dockrell. Ben Cooper (65) and Colin Ackermann (27) then progressed the score to 124 in the 14th over through turning the strike over regularly, and Cooper taking on the aggressor role hitting 8 fours and 1 six in his 45-ball knock.

With five overs left in their innings, the Dutch side was set to launch in the last 30 balls at 130-3, but some well-controlled and full-length bowling by the Irish bowlers saw four wickets tumble and just 37 runs conceded. The last over, bowled by Craig Young, claimed two of the wickets for a miserly 7 runs.

Netherlands went into the innings break with 167-7 on the board, a target Ireland would have felt within range.

SCORE UPDATE: End of innings, Netherlands finish on 167-7. Great last over by @Youngy_44 with 2 wickets and just 7 runs.

Pleasingly for Ireland, all top-order batters contributed towards what would end up being a comfortable run chase. The experienced of Paul Stirling (23), Kevin O’Brien (23) and Andy Balbirnie (32) set the platform at the outset, while the youngsters Gareth Delany (29), Harry Tector (47*) and Mark Adair (10*) saw Ireland home with 10 balls to spare.

Tector particularly looked comfortable in what is just his third international match, and having started his T20I career with scores of 21, 60 and 47*, Head Coach Graham Ford will be pleased that has hopefully found a classy middle-order batsman for the long-term.

Ireland finished the run chase in a flurry, the last three balls going for a six and two boundaries, and the target was passed with 10 balls to spare

“We chose to bowl first on a pitch we were unfamiliar with. We thought we would back ourselves in the run chase. We were very confident in our line-up, and that line-up can be pretty flexible depending on the match circumstances, as you saw there with Mark [Adair] going in with five overs to go with us needing just less than 10 an over. We’ve got good options right through the side and the boys did a great job today.”

“It was very pleasing the way we came back at the Netherlands – we gave them a few more at the start than we would have liked but to see the way the boys closed out the innings was very pleasing.”