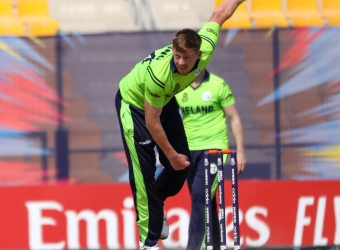 ABU DHABI, UAE – The Ireland Men’s cricket team has thumped Nigeria by 8 wickets in their final Group Stage match of the ICC T20 World Cup Qualifier tournament in Abu Dhabi today, moving to the top spot in Group B and will nervously await tomorrow’s match between Jersey and Oman tomorrow to see who qualifies automatically for the World Cup.

With the loss of David Delany due to a torn meniscus knee injury, Stuart Thompson returned to the side for this first-ever international cricket match between the two sides.

After losing the toss and being asked to bowl first it didn’t take long for the men in green to assert their dominance. Leg-spinner Gareth Delany struck first, cleaning up opener Daniel Ajeku who tried to go back and cut a ball too close to his stumps and was beaten in flight.

Two further wickets fell soon after, and the Nigerians found themselves struggling at 13-3 after 5 overs. From that point the African side never recovered, with the Irish bowlers bowling a consistent line and length on a sluggish looking pitch. Nigeria finished on 66-9 from their 20 overs – equal to the lowest completed T20I total by a side not being bowled out.

For Ireland, Craig Young claimed career-best figures of 4-13 from his four overs, and Mark Adair went top of the tournament wicket-taking chart with 2-10 from his four overs. Demonstrating their tight bowling, five wickets to fall were bowled, with Head Coach Graham Ford pleased that his side didn’t let the pressure off throughout the full 20 overs.

Craig Young finishes with 4-13 from 4 overs. Here is his first wicket: https://t.co/do9ag1Y1BL

With the state of the Group B table, at the halfway stage Ireland’s batters knew they had to knock off the target in 9 overs to go top of the Group. And they achieved their target off just 37 balls.

As a notable aside, Paul Stirling (694 runs) and Kevin O’Brien (690 runs) now sit in first and second place in the records for most runs in a calendar year in T20I cricket worldwide.

The circumstances of the match means that Ireland leaps into first place in the Group B table requiring Jersey to upset Oman tomorrow in order to claim automatic qualification for the World Cup. If Oman win tomorrow, Ireland will go into a play-off against the third-placed side from Group A – which is currently Scotland.

GREAT STAT!@stirlo90 and @KevinOBrien113 are now #1 and #2 in the records for most runs in T20I cricket in a calendar year.

And @balbo90 isn't far behind!

After the match, Gary Wilson said:

“We’re top at the moment and will keep a close on eye on the game tomorrow. All we could do is do our job as best we could today and it was a clinical performance. Credit must go to Nigeria – it’s great to see teams like Nigeria here competing at this level, it can only be a positive thing for the globalisation of cricket around the world.”

“We want to be playing our best cricket towards the end of the tournament, and we probably haven’t been at our best yet, but some positive performances over the last couple of days and we’ll look to take that into the next match.”

“David Delany has a bit of an issue with his knee, we’re not quite sure how bad yet, but we’ll monitor that pretty closely over the next 24 hours.”

After the match, Player of the Match Craig Young said about his career-best figures of 4-13:

“It’s important when someone comes into the team they make the most of it – it’s not always easy, but something you have to do.”

“It’s nice to put in a meaningful performance, it’s credit to how strong the team is now – we have plenty of bowling options and that’s a great thing going forward.”