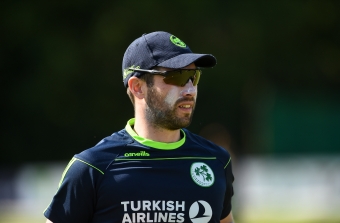 Andrew Balbirnie will lead the side out in its 1,000th match

GREATER NOIDA, India – The Ireland Men’s cricket team has arrived in India for the three-match T20 International series against Afghanistan, and captain Andrew Balbirnie sees the series as a critical piece in the squad’s preparation for the T20 World Cup in late 2020.

The first match of the series on Friday also represents the 1,000th match played by an Irish men’s team since its first ‘capped’ match in 1855.

“It’s always special to lead an Ireland team out - I haven’t done it a lot, but doing it for the first time in the Caribbean was the proudest moment of my career to date. The 1,000th game is a testament to everyone involved in Irish cricket through the years, and all the work that has been done behind the scenes - we as players are just very fortunate to go out there and play in the 1,000th game. There have been so many memorable game in the past, so our job is to make sure there are just as many memorable games in the future.”

“The squad itself is shaping up pretty well - we had our first outdoor training today, following the arrival of everyone yesterday. Some of the guys who flown here direct from the Ireland Wolves series in South Africa, so today is all about acclimatisation and making sure everyone has recovered from the flight. It was good to get outside today and get the cobwebs out, get used to the surroundings and the pitch.”

“All of the T20s we play leading into the world cup are important, I’ve stressed that with the guys. We’ve got so many opportunities to play top teams in this format, so going into the world cup at the end of the year we should be as prepared as we have ever been. The guys know there are plenty of opportunities to impress, to stake a claim and book a ticket on that flight – and hopefully put in performances to win us games. But at the end of the day it’s about preparing for that world cup, with the aim of qualifying out of the group stage, then seeing how we go in the next stage.”

“There’s no shying away from the fact that Afghanistan have had our number in T20 Internationals, I can’t honestly remember the last time we beat them in this format. We’ve certainly got a point to prove against these guys - we know them pretty well, we’ve played them a lot of times in all formats of cricket, and we probably know what sort of game plan they’ll try to bring against us. But the beauty of it is that we’ve got guys coming in who have been impressing from the off, so it will be interesting to see how we go in this series against a good outfit.”

“Gary Wilson and Graham Ford over the last 18 months have taken this team forward - I was just the fortunate one who was captain when we beat the West Indies - but there had been a lot of hard work done in the background to get us to where we are now. We’re by no means the finished article at all, but we’re going in the right direction, and if we keep heading in that direction every time we go out and train or play then this team will be in a much better place.”

Ireland Men’s T20 International team has risen from 18th in the world rankings to 13th. The team will have qualified for the 2020 ICC Men’s T20 World Cup in October/November in Australia.

The first match played by a representative Irish side was 10-11 September 1855, when a Gentleman of Ireland took on the Gentlemen of England at the Phoenix Park in Dublin, a fixture recognised by Cricket Ireland as the first for which it awarded caps. On that occasion the Irish side won by 107 runs. The first T20 International on Friday will be the 1,000th match played by an Irish men’s side across all formats.

Cricket fans in Ireland and the United Kingdom will be able to watch the series via livestream at: https://www.youtube.com/channel/UCNU0Vv6U1xZS82cIQrgDeqw