Ireland come up against an in-form Australia 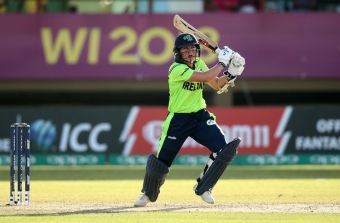 Pre-game Ireland gathered in a team huddle to award Kim Garth her 100th cap - a milestone that began with her international debut in 2010 against New Zealand.

After warm-ups were complated Captain Laura Delany won the toss and chose to bat. Ireland looked towards a confident start and a 30-run opening stand between Clare Shillington (19 runs from 18 balls; 3 x fours) and Cecelia Joyce (10 runs from 27 balls; 1 x four) gave the innings a platform to launch from.

However, the combination of a direct hit run out of Joyce, combined with some tight middle overs bowling by the world’s number one team, took a cluster of wickets and slowed the Irish scoring rate, and when Kim Garth came to the crease to join her captain, Ireland was 46-5 after 13 overs.

Delany and Garth took the initiative though, and put on a 41-run partnership to give the total a boost. Garth’s innings of 24 runs (26 balls; 2 x fours) was ended on the third last ball of the innings, and Delany (14 runs from 20 balls; 1 x four) and Shauna Kavanagh (6 runs from 2 balls; 1 x four) finished the innings unbeaten with the team total on 93-6 from 20 overs.

As Delany said in the post-match captain’s interview, Ireland felt that 120-130 was a par score and a total they could defend, so the challenge for the bowlers was immense.

Australia then took control of their innings with a 71-run opening stand - bolstered by the in-form Alyssa Healy whose 56* from 31 balls included the record of the fastest half-century in World T20 history.

Garth was rewarded for her all-round efforts on the night with the wicket of Beth Mooney but Australia passed the required total in the 10th over and claimed a nine-wicket win.

Kim Garth, speaking at a press conference after the match, said:

“Obviously, it was a tough day at the office for us, we were really excited about it coming into the game, off the back of a big win against Sri Lanka and we felt that we could cause a few upsets, but we’re pretty disappointed with this evening’s performance. It was tricky against Australia, but we’re just going to have to park it and move on to Pakistan on Tuesday.”

“The wicket was slow, but we talked about our percentage of scoring shots and - when you lose a cluster of wickets - to just concentrate on getting down the other end and turning the strike over. We managed to do that better at the back of the innings, but once we got stuck in the middle we found it hard to get out of that rut. It is something we need to learn from going forward.”

“Bowling, we did a lot of planning and a lot of individual plans for particular batters, but we just didn’t execute those plans very well. We were happy with the start we had with the bat, we were 27-1 I think after the Powerplay, but then we lost a few wickets in a cluster which put us back.”

“It is so exciting to be here, and we’re looking at the expansion of the Women’s Championship to 10 teams - we have to concentrate ensuring we’re in that top 10 in two years.”