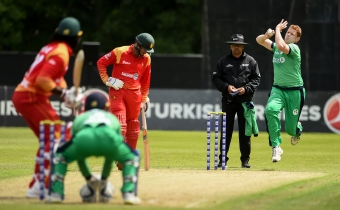 After losing the toss, Ireland had first use of the ball on a wicket that looked favourable to the seamers – and favourable it was. Tim Murtagh (3-39) struck first, removing opener Ryan Burl for 1. Mark Adair then joined the party forcing the in-form Craig Ervine onto his back foot from where he chopped the ball on his stumps. Soon after Murtagh had a second and Zimbabwe were 31-3 in the 9th over.

Captain Hamilton Masakadza (23) and Sean Williams (67) looked to restore some stability in the innings, until William Porterfield, who was cleverly rotating his seamers so as to not let the visiting batsmen settle, threw the ball to Shane Getkate. The Northern Knights all-rounder claimed two wickets in two overs, and his provincial compatriot Adair claimed another, and suddenly Zimbabwe were at crisis point on 88-6.

Looking to counter-attack, Williams upped the tempo of his scoring and registered his 31st ODI half-century. After several late-innings partnerships, Zimbabwe moved their score to 172 before Williams was unluckily run out backing up at the non-strikers end, after bowler Adair failed to grasp a tough caught-and-bowled chance but the ball deflected onto the stumps with Williams outside his crease.

The end was nigh, and Ireland soon wrapped up the innings, with the last wicket falling at 190 from 46.5 overs.

Impressively for Ireland, the entire bowling unit contributed to the dominating performance with Murtagh taking three wickets, Boyd Rankin, Getkate and Adair two apiece, and Kevin O’Brien going wicketless but bowling a tight 0-25 from 8 overs to keep the pressure on at one end through the middle overs and never allowing the visitors to gather momentum.

In response, the still relatively new opening pair of James McCollum and Paul Stirling followed up their century stand in the last match with a 60-run partnership today. Stirling was out first, falling for 32 from 44 balls, ending his run of consecutive scores above 50 in ODIs, which will remain a remarkable six.

Andy Balbirnie (5) departed early, but McCollum and captain William Porterfield came together to compile an innings-stabilising 43-run partnership. McCollum brought up his second consecutive half-century, before falling shortly after for an impressive 54. Porterfield and Kevin O’Brien then sought to close out the victory with some determined batting, but on 49 Porterfield played back to a low skidding ball from Ryan Burl and was bowled.

With 32 runs still for victory, O’Brien (35*) and Lorcan Tucker (8*) batted well to see out a well-deserved victory by 6 wickets with almost nine overs to spare.

Tim Murtagh was named Player of the Series for taking nine wickets at an average of 11.33. William Porterfield said after the game:

“What pleased us today was our general attitude – we went hard and once we were on top we never let off.”

“Murts [Tim Murtagh] just keeps doing it – at his age he knows what he’s doing and what he has to do, it’s just nice to have someone like that who you know is one of your bankers.”

For the captain, the day included a number of milestones, including registering his 4,000th run in ODIs for Ireland, and the victory was his 50th ODI win as captain. Asked about these, he said:

“Milestones are things maybe you might tick off, some things you might look back in years to come and be pleased with, but the series win 3-nil was the first real thing I was focussing on.”

The two sides will meet for the first of three T20 Internationals on Wednesday at Stormont in Belfast. Match scheduled to begin at 12.30pm. Tickets available at the gate or online via Ticketmaster.