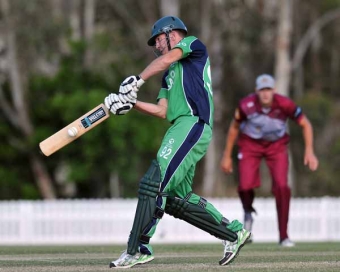 Craig Young took five wickets and top scored with an unbeaten 37 but it wasn’t enough to stave off another comprehensive defeat for Ireland against Queensland in the second game of their tour.

Bready paceman Young took three early wickets to reduce Queensland to 30 for 3, but a fourth wicket partnership of 79 between Simon Milenko (41) and skipper Jason Floros (30) put the home sides innings back on track.

George Dockrell broke the stand when he trapped Floros lbw, and when Peter Chase (4-52) removed the impressive Milenko shortly afterwards, Ireland were back in contention with Queensland 110 for 5.

The defining moment of the innings came just six runs later when Young dropped James Bazley at long-on from the bowling of Dockrell.

Bazley took full advantage of the reprieve to smash 90 from just 58 deliveries (9 fours, 5 sixes), taking the game away from Ireland.

He was given excellent support from Jack Wildermuth who raced to 52 from just 43 balls (4 fours, 2 sixes) as the pair added 88 in just 10 overs for the 8th wicket.

Queensland finished their innings on an imposing 289 all out, with Young’s 5 for 41 the stand-out bowling performance, closely followed by Chase whose analysis was bolstered by wickets late in the innings.

Early boundaries from Stuart Poynter and Andrew Balbirnie took Ireland to 14 without loss after three overs of the reply, but 14 deliveries later their innings was in total disarray as they lost 5 wickets for just 3 runs collapsing to 17 for 5.

Alister McDermott, son of Australian Test legend and former Irish bolwing coach Craig, was the destroyer-in-chief, having Balbirnie(8) caught at slip before trapping Thompson lbw for 0.

Walter then had Kevin O’Brien (0) caught behind, and McDermott removed Alex Cusack to a regulation catch at third slip.

The innings was then all about respectabilty as the Irish attempted to rebuild. Andrew Poynter (15) and Andrew McBrine (6) offered brief resistance but both fell in quick succession to leave Ireland floundering on 51 for 7.

The lower order decided to counter-attack, with Graeme McCarter hitting 5 fours and a six in a breezy 31, sharing an 8th wicket stand of 39 with George Dockrell (14).

Craig Young clubbed three sixes and two fours in an unbeaten 37 from just 25 balls as he and Peter Chase (4) took the Irish total to 138 all out - the last wicket putting on 41, the biggest stand of their innings.

McDermott finished with 4 for 14, while Walter took 3 for 9 in the convincing 151 run win.

Ireland are next in action on Tuesday and Thursday when they play ACT Comets in two matches before departing for New Zealand.

The arrival of county batsmen William Porterfield, Gary Wilson and Niall O’Brien will hopefully bring a turnaround in their batting fortunes.