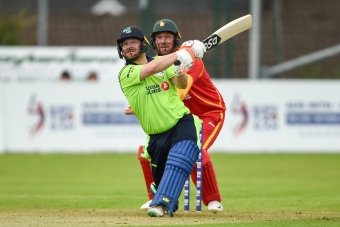 Stirling hit a remarkable 83* from 36 balls

Stirling’s innings featured seven sixes and six fours as he ruthlessly dealt with a Zimbabwean attack that struggled to find the right line and length to the in-form Irishman.

Stirling first shared a 58-run opening stand from just 30 balls with Kevin O’Brien (19 from 13 balls), then following O’Brien’s departure Andrew Balbirnie (28* from 17 balls) joined the fray, and with Stirling the pair saw Ireland home hitting an unbeaten partnership of 76 runs off 35 balls.

Earlier in the day, showers reduced the game to a 13-over a side affair and the Zimbabweans, who lost the toss and were sent in to bat first, got off to a flyer. Led by Craig Ervine, who smashed 55 from 32 balls, the visitors looked to be mounting a seriously competitive total, ticking along at 11-an-over for the first eight overs. Sean Williams’ 34 from 12 balls was a delightful cameo, however late wickets fell and the Zimbabweans momentum was restricted in the last three overs. They ended on 132-8 from their 13 overs – a total that still seemed competitive.

After an adjustment to the target based on DLS calculations, the Irish side required 134 for victory. Ireland’s batsmen, though, came out firing and cantered to victory with 13 balls to spare.

A wonderful victory to the home side, capping off a day which saw Gareth Delany make his international debut, and Mark Adair his T20I debut.

The two sides meet again on Sunday at the same venue in the final T20I of the series (the first T20I was washed out). Tickets available at the gate, the game starts at 4pm.