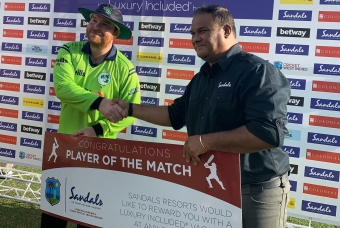 Paul Stirling claimed Player of the Match for his 95

Captain Andrew Balbirnie won an important toss and elected to make first use of a wearing wicket. And ‘use’ it, they did. Opening pair Paul Stirling (95 from 47 balls) and Kevin O’Brien (48 from 32 balls) smashed the ball to all parts of the ground - and smashed some records along the way - as they set about demolishing a shellshocked West Indian attack.

The pair put on 93 runs in the first six overs – a record high team score during the first powerplay in T20I cricket – and went on to strike a 154-run partnership in 12.3 overs. This was a record T20I partnership for Ireland for any wicket, and put the visitors in a commanding position.

Momentum is an important aspect of T20 cricket, and the first wicket of O’Brien seemed to pull back the Irish trajectory. Four wickets fell in quick succession, with the Irish batters struggling to regain control and not lose the advantage from their record-breaking start. Amongst the wickets to go down was Stirling, falling a heart-breaking five runs short of his maiden T20I century. His innings included 8 sixes and 6 fours, as he demonstrated his full range of shots.

That’s the record partnership in T20Is for Ireland for any wicket.  pic.twitter.com/RgqPuNbLla

A late innings of 19 from Gareth Delany and 17 from Gary Wilson helped the Irish finish well, ending on 208-6 from their 20 overs – the third-highest team score for Ireland in this format of the game.

The West Indian batters needed a fast start, and they got away at pace. 33 came up from the first three overs, however, an almost unbelievable diving outfield catch by George Dockrell brought the first wicket from Josh Little’s bowling.

The Windies batters continued to pile on the runs – as the run rate required dictated they must – but crucial wickets of Evin Lewis (53) and Shimron Hetmyer (28) changed the momentum of the game again.

The West Indian captain Kieron Pollard hit a breezy 31 from 15 balls, threatening to take the game away from Ireland, but the Irish fielders continued to hold their catches – and their nerves – taking the game into the last over.

Needing 15 from the last over, a seesawing six-balls saw two wickets fall and a six hit, but with five needed from the last ball, Josh Little (3-29) delivered a good length ball and Ireland registered only their second-ever victory over the West Indies in white-ball cricket.

After the match the Player of the Match Paul Stirling said:

“It was a really good pitch and I think we put a par score on which showed in the end, we felt we were in the game the whole way through. It was touch and go, but we’re enjoying the tight games – we came out the right side this time, so it’s a nice feeling.”

“I think there’s a huge different in mindset between T20 and ODI opening, here you have the chance to express yourself and really have fun, playing cricket as you did as a youngster and how you really want to play. Whereas in 50-over cricket you have to try and bat a little bit longer, but it was just really fun today.”

“With the ball, I think we had to aim to take wickets really, it can be quite a daunting task when the big lads come in and you know how hard and far they hit it, so if we try get that wicket we can really squeeze them. The more wickets you get, the closer you get.”

“Everyone is ecstatic, we came so close in that second ODI and it maybe affected us in that third ODI, so to show the bottle and come out against one of the top teams in T20 cricket and get a win was great for the vibe of the team.”

“I think we lost Kevin and Paul quite quickly together having batted so brilliantly for us – they are our two key men and they showed it today. Maybe we could be a bit better when we do lose set batsmen – we need to learn to rotate a bit better. But when you get 200+ in any T20 you feel in the game. They got off to a pretty good start, but we kept our composure and that’s all I asked from the guys, just to be clear with what they wanted to do and they did that.”

“George’s last over was brilliant – to come back after a couple of the batters got after him was great. That’s what T20 cricket is about, if you bowl one over like that you can change the game.”

“It was just about as well as I’ve ever seen Paul bat in T20 cricket – he’s a world-class player and he’s played all around the world, he’s such as important player for us in all forms of cricket and he leads from the front, which he did today.”

“It’s great to get a win obviously but you want to win a series and make history, so if we can do that in the next two games we can go home very happy.”

The second match of the T20I series will be on Saturday 18 January 2020, starting at 10pm (GMT) at St. Kitts and Nevis. For fans in Ireland and the UK, the second match will be televised on Sky Sports Cricket channel.