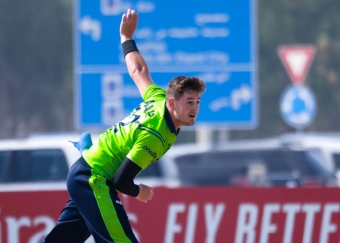 ABU DHABI, UAE – The Ireland Men’s cricket team has bounced back to form with a convincing win over Jersey in their penultimate Group Stage match of the ICC T20 World Cup Qualifier tournament in Abu Dhabi today.

Smarting after the loss to Canada on Wednesday, Head Coach Graham Ford was looking for an improved bowling effort in today’s match after making one change to the line-up with Craig Young coming in for Stuart Thompson.

After winning the toss and choosing to bowl first it took just four balls to show the Irish side was back in business. Mark Adair, who has bowled impressively throughout the tournament, struck in the first over removing Jersey opener Harrison Carlyon without scoring.

The express pace of David Delany accounted for the next wicket, ripping through Nick Greenwood’s defence and upsetting the stumps, and this signalled a collapse from the Jersey batters. In all they lost 9-69 in 15 overs to be all out off the last ball for 105.

After having an off day with the ball on Wednesday, the Ireland bowlers were on song today, led by Player of the Match Adair (3-10 from 4 overs), two wickets to David Delany, and one wicket apiece to Boyd Rankin, Gareth Delany, Craig Young and George Dockrell. Rankin’s wicket, a sensational reflex caught and bowled, was his 50th wicket in T20I cricket in this his 45th T20I appearance.

The main concern for Ireland though is the injury to paceman David Delany who left the field limping after not being able to complete his 3rd over.

Chasing 106 for victory, the Ireland batters were in no mood to let Jersey in with a sniff. Paul Stirling struck 58* from 37 balls to lead the response (including 5 fours and 2 sixes), while Andy Balbirnie was getting back to his best form making 33 from 27 balls.

While today Kevin O’Brien only made 11, he did pass 2,000 T20 runs for Ireland in the process with only Stirling and William Porterfield ahead of him on the all-time Irish records.

To ensure domination of the match and give Ireland a big boost in the Net Run Rate column, Stirling finished the run chase off by lifting Jersey’s Dominic Blampied for consecutive sixes.

The win leaves Ireland in third place (on Net Run Rate) in the Group B table with one game to play. The slim hopes of automatic qualification for the World Cup will now take a convincing win against Nigeria and results going favourably elsewhere. If not topping the Group and achieving automatic qualification, Ireland will enter the sudden death knock-out phase early next week.

After the match, Gary Wilson said:

“It was obviously very important to bounce back strong, if we didn’t we may have been out of the competition. So it was pleasing to get a win today and hopefully we can take the momentum into tomorrow and move on from there.”

“Crucial tomorrow will be run rate, which will be important, but first we have to win the game. Nigeria is a bit of an unknown quantity for us, so we’ll have a look at the footage from the previous games and look to attack them the best way possible. We’ve played some good cricket today, so hopefully, we can continue that into tomorrow.”