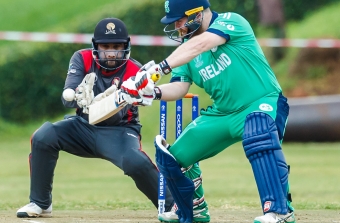 A record-breaking opening partnership by Captain William Porterfield and Paul Stirling set Ireland up for a dominant victory over the United Arab Emirates in Harare today, putting Ireland through to the Super Six Stage of the Qualifier tournament.

The UAE Captain, Rohan Mustafa, won the toss under threatening grey skies and sent Ireland into bat on a good wicket. With second place in Group A on the line, Porterfield and Stirling set about the task of building a competitive total.

What occurred next was a record-breaking opening partnership for Ireland Men’s team with the pair racking up 205 runs off 34.1 overs. Their partnership - which also represented the second highest partnership of any wicket in Ireland’s ODI history - saw both batsmen dominating a UAE attack that had no answer to the aggressive batting on display.

Two short rain delays, which reduced the innings to a maximum of 44 overs, did not slow the Irish run-rate. Both batsmen played near chanceless innings’, until Porterfield was out caught on the mid-wicket boundary for 92 (103 balls; 10 x fours, 2 x sixes). This was the first occasion Porterfield was out in the nineties in his ODI career, but his contribution to the Irish campaign in this tournament has been immense, averaging 62.5 across his four innings, and was unfortunate not to bring up his second century in three innings.

With a launching pad set, Ireland elevated Kevin O’Brien to chase quick runs, but one of his first tasks was to support Stirling through to his century, which was duly achieved off 106 balls. This was Stirling’s seventh career ODI century, and may turn out to be one of his most important to date, as he flayed the hapless UAE bowlers to all parts of the ground.

Stirling continued his assault on the bowling until on 126 he miscued a pull shot and was caught by the UAE wicketkeeper. His 117-ball innings featured 5 sixes and 15 fours, and was the 5th highest individual total in Ireland Men’s ODI history.

Kevin O’Brien then stepped forward as the senior batsman and started to escalate his scoring rate. While his first 11 runs came from 11 balls, his next 39 runs came from 25 balls as he blasted his way to 50* from 36 balls (7 x fours, 1 x six). O’Brien, Ireland’s third highest run scorer in this form of the game, passed 3,000 career ODI runs during the innings - a significant achievement for the 34-year old Dublin-born all-rounder who dramatically rose to global fame in 2011 for hitting the fastest century in World Cup history against old foe England.

The chase for quick runs saw Ireland lose four wickets in the last six overs, but nothing the UAE tried could stop the Irish momentum, with 60 runs coming from the last five overs of the innings.

Ireland’s final total of 313-6 off 44 overs was the seventh highest team total in Irish ODI history, and set the UAE a daunting run-chase. Match officials calculated the revised target using the Duckworth-Lewis Method, and confirmed the target off 44 overs was 318, meaning the UAE needed to score at a rate of 7.25 runs per over from the outset.

For the UAE, three wickets went to seamer Mohammad Naveed, however his tally was claimed with the sting of 84 runs being taken from his nine overs. Spinner Imran Haider claimed two wickets, but was equally expensive with 73 runs coming from his eight overs.

The total of 313-6 was the second time that Ireland Men’s team has passed 300 in an ODI this calendar year, and provided the batting unit a good hit out leading into the Super Six stage of the tournament.

With the wind proverbially - and literally - at their back, it was the turn of the Irish bowlers to turn the screws and ensure victory – and they did not disappoint.

Barry McCarthy (1-23 off 5 overs), on his return to first team duties, claimed the first wicket inducing an edge from opener Ashfaq Ahmed through to keeper Niall O’Brien with the score on 20. Tim Murtagh (1-23 off 5 overs) then claimed the second wicket of the innings shortly after, getting the other opener Chirag Suri for 9, with the score on 34.

Captain Porterfield made tactical bowling switches at important times and brought tall paceman Boyd Rankin (4-15 off 6 overs) into the attack, who performed what could only be described as a demolition job of the UAE middle order. Rankin claimed four wickets in the space of 10 balls, finishing with his career-best bowling figures and reducing the UAE to 67-6 with little sign of hope from either remaining batsmen nor the grey skies above.

Simi Singh (3-15 off six overs), making his first appearance in the tournament, then came into the attack and had immediate success. In only his fifth ODI appearance for Ireland, the all-rounder claimed the first three wickets of his ODI career in a spell of bowling that all but finished off any hope of a rearguard action by the UAE.

McCarthy returned to clean up the tail and end the UAE’s innings on 91, with Ireland winning the match by 226 runs (DLS method).

Paul Stirling was deservedly awarded Player of the Match, but the whole team can be proud of all aspects of the game, bouncing back in the best way from the disappointing loss to West Indies on Saturday.

Ireland now progress to the second stage of the tournament, and will play the following: