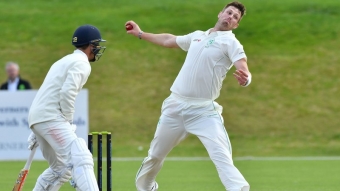 Ireland regained the ascendancy following a dominant all-round display on the second day of their ICC InterContinental Cup clash against Scotland in Dubai.

Boyd Rankin, Kevin O’Brien and Tim Murtagh all bowled superbly as the Irish racked up a 110-run first innings lead and the six bonus points on offer to keep alive their faint title hopes.

Replying to Ireland’s total of 251, George Munsey (38) and Kyle Coetzer had shared an opening stand of 55 for Scotland before Rankin got the breakthrough, having Coetzer well caught by O’Brien at point for 22.

When Munsey was caught on the boundary by Chase off O’Brien shortly afterwards the floodgates opened as Rankin (4-45), O’Brien (3-14) and Murtagh (2-24) took advantage to leave the Scotland reply in tatters.

Safyaan Sharif struck a defiant unbeaten 26 but it was too little, too late as they were dismissed for 141.

Paul Stirling (12) was adjudged lbw early on, but William Porterfield (29) and Andrew Balbirnie (21) shared another half-century stand to keep Ireland in control, before both went within the space of six balls.

John Anderson (14) was trapped lbw but any hopes Scotland entertained of a late rally were extinguished by a 5th wicket stand of 64 between Gary Wilson and Simi Singh.

Wilson struck 5 boundaries in his 56 from 87 balls as he recorded his 28th half century in Irish colours – his 6th in the competition – before running himself out shortly before the close.

Singh (34*) and Kevin O’Brien (13*) safely negotiated the final four overs of the day without further alarm as the Irish finished on 186 for 5, an overall lead of 296, which puts them firmly in the driving seat going into the third day.