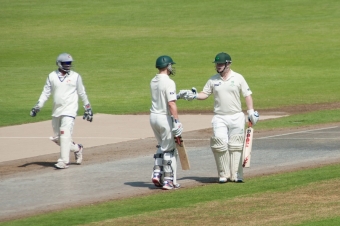 The opening partnership was worth was 126

A thoroughly professional first day batting display from Ireland has left them in control of their InterContinental Cup clash with the UAE in Sharjah.

An unbeaten 99 from Ed Joyce, and half centuries from captain William Porterfield and Paul Stirling meant Ireland finished the day on a commanding 272 for 2.

After being put in by their opponents Porterfield and Stirling adopted a safety first approach on the docile pitch, sharing a opening partnership of 126 in 46.5 overs.

The pair were rarely troubled by the friendly UAE attack, comprised of just the one front-line seamer and a battery of spinners.

Stirling (61) stuck 10 boundaries in his 147-ball stay, before being trapped lbw by Raza early in the afternoon session.
His opening partner Porterfield put the troubles of 2012 behind him with an authoritative innings, which probably deserved a century. He had reached 82 from 221 balls (8 fours, 1 six) before unluckily playing on to Naveed shortly after tea with the total on 187.

Ed Joyce was in superlative form, and a strike rate of 82.50 was more than twice that of the other Irish batsmen. Joyce showed his full range of shots, not being afraid to use his feet to the spinners to hit over the infield.
He was the dominant partner in an unbroken third wicket stand of 85 with Niall O’Brien (24*), just missing out on his hundred when he could only manage a single from the final delivery of the day.

Joyce however wasn’t too disappointed to be stranded overnight on 99, and said afterwards their would be no nerves overnight: “I’m not nervous at all. I’ve never been 99 not out overnight before, but I’m just happy to have scored 99 - if I was to get that score every time I would take it.

“It’s a slow and low wicket so if you stay in your crease it can be difficult to score. The lads had given us a great start so I made the conscious decision to try and score about a strike rate of 70, use my feet a bit and maybe take a few more risks than the others. I was a bit more attacking and that helped on that wicket.

It’s eight years since Joyce scored a century for Ireland - coincidentally against the UAE in the 2005 ICC Trophy at Stormont, as he guided Ireland to a two-wicket win in a nervous run chase: “I remember that game very well - I think we were chasing about 230 in what was a huge game for Irish cricket. If we’d lost that one, we would have struggled to make the 2007 World Cup. I’ve done well against the UAE - I’ve also made a hundred for Sussex when we played them.

“We’ll probably look to bat normally in the morning, to maybe another 100 runs or so without losing too many wickets, and push on a little bit more in the afternnoon. We have good hitters coming in further down with people like Kevin O’Brien, Trent Johnston and John Mooney who can all score quickly.”

William Porterfield wasn’t too surprised at being asked to bat, although he admitted it was a blessing in disguise to lose the toss: “If the bowlers are going to get any assistance it usually comes in the first session, so if you can battle through that it comes pretty decent to bat on. We’ve got ourselves in a great position but we’ve got to make that count tomorrow.

“It’s pleasing to get a few runs myself but all the batsmen have played well, with Ed (Joyce) being exceptional. We’re not setting any targets just yet - we’ll bat to lunch and reassess from there. I think the pitch will still be pretty flat, and it’s just a matter of applying ourselves and setting a platform for a big total.”