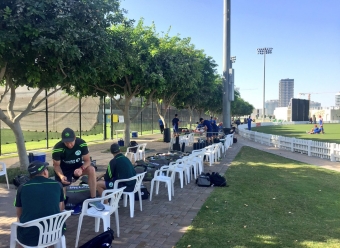 Ireland training ahead of the ICup match against Scotland

Ireland face Scotland in the final round of ICC Intercontinental Cup matches in the UAE starting tomorrow, Wednesday November 29th, at 9.30am. (5.30am Irish time)

Ireland, four times winners of the competition, need to beat Scotland at the Dubai International Stadium to have any chance of claiming a fifth title.

There have been two changes made to the original squad selected for the Intercontinental Cup and the following ODI Series against Afghanistan.

Ed Joyce didn’t travel after suffering a reaction to his ongoing knee problem following a warm weather training camp at the European Cricket Performance Centre in La Manga. John Anderson was called up to replace Joyce, the Merrion man has one century and five half-centuries in his six ICup appearances to date.

Stuart Poynter was the other addition to the Ireland squad after Niall O’Brien returned home from the UAE. Poynter, 27, has played 39 times for Ireland since making his debut in 2011.

Ireland warmed up for the Scotland tie with a 13-aside fixture against the UAE at the weekend. Gary Wilson top-scored for Ireland with 74 (8x4, 2x6) from number 5, while Paul Stirling got Ireland off to a good start with a run-a-ball 45 (8x4, 1x6).  John Anderson immediately settled in with a patient 42, batting at number 4.

The bowlers had a very productive start to Day 2 picking up 5 wickets in the morning session and another just after lunch. All told they bowled the UAE out for 246, with the wickets shared out amongst the attack.

Paul Stirling picked up 3 wickets while there were braces for Peter Chase, Tim Murtagh and George Dockrell. The other wicket was taken by Barry McCarthy.

A very good workout for the Ireland team ahead of four days of Intercontinental Cup action at the Dubai International Stadium. Stay up to date on the action on Twitter via our handle @irelandcricket