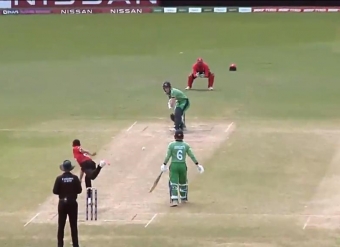 TAROUBA, Trinidad – An unbeaten 83 from Philippe le Roux, three wickets from Reuben Wilson, and an all-round performance from Jamie Forbes saw Ireland roar back from the brink of disaster to defeat Canada by 94 runs in the Plate Quarter Final of the ICC Under-19s Men’s Cricket World Cup today.

After losing the toss, Ireland was inserted and immediately was on the back foot, losing wickets early and regularly. The Canadian bowling attack was disciplined, but a pitch aiding bowlers early and late movement from the seamers accounted for the Irish top order.

When Railway Union’s 17-year old batter le Roux came to the crease Ireland was 34-3 and looking off-the-pace in a match they were favourites to win. While wickets continued to fall around him, le Roux set about rescuing the innings while looking for a partner just to stay around with him. His innings was punctuated by his trademark sweeps and reverse sweeps, and he brought up his half-century off 66 balls. Eventually he found support from Jamie Forbes who came in batting at nine. The pair put on a 48-run stand for the 8th wicket, with the left-handed Forbes looking as comfortable as le Roux at times. However, on 25, Forbes received a ball from leg-spinner Sheel Patel that stuck in the pitch and he played it off the leading edge back to the bowler.

Muzamil Sherzad then joined le Roux and the pair put on 37 from the next nine overs – Sherzad looking to not only help stretch the innings deep, but even give le Roux an outside chance to bring up an unlikely century. On 13, however, Sherzad was bowled by a well-directed yorker by Kairav Sharma, and Reuben Wilson was similarly dismissed by Parmveer Kharoud to end the Irish innings on 179 in the 44th over.

With just 179 to defend, the Irish bowlers needed a positive start – and that was duly delivered by the 15-year old Wilson. The YMCA seamer used pace and movement to great effect, removing both of the openers with just 12 runs on the board.

Liam Doherty struck soon after, and suddenly Canada were 12-3 in the 6th over, with the Irish side noticeably lifting in the field. Not long after, both Sherzad and Nathan McGuire struck in their respective first overs – the latter wicket came courtesy of a spectacular running catch by Matthew Humphreys at mid-on – and the Irish side sensed a remarkable comeback victory.

The Canadian batters were desperately seeking a partnership to solidify the innings, but the Irish attack pressed home its advantage. Wickets continued to tumble, and when the last wicket fell with the score on 85 – quite a significant number in Irish cricket folklore - all six bowlers had claimed at least one wicket each. Wilson starred with 3-18, Forbes took 2-2 with his left-arm off-spin, and Nathan McGuire with 2-13 with the best returns.

Ireland’s next match will be against the winner of tomorrow’s match between Zimbabwe or Scotland on Saturday in the Plate Semi-Final.

After the match, Tim Tector said:

“It was a great win – we had a shaky enough start with the bat, but we dragged it back really well and we bowled exceptionally well. It was great to get our first win of the Plate and now we look to push on.”

“Philippe’s innings was great, he came it at a tough time with wickets falling around him. But he batted the way he likes – he wanted to take the game on against the spinners, and rotated the strike well against the seamers. A shout out to all the work he puts in behind-the-scenes, it really showed out there on the pitch today.”

“We bowled well, it was similar to the Scotland warm-up game where we didn’t give them many bad balls, which unfortunately we did in the last two games. We were quite tight with our lines today, and we took our chances in the field, so I couldn’t have asked for much more.”

“Plate semi-final next, it will be Zimbabwe or Scotland – we’ll back ourselves against either of those two sides, we have to be confident. We’d obviously love to make the Plate Final, but we’ll take it one game at a time.”