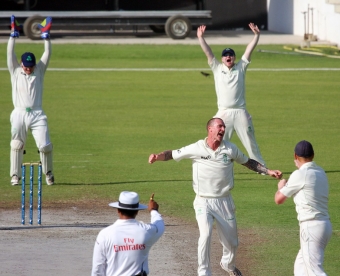 Ireland’s cricketers endured a tough examination in the searing sun of Sharjah but still have the upper hand after the third day of their InterContinental Cup clash against the UAE.

After an obdurate stand of 210 between Khurram Khan and Arshad Ali, which left a frustrated Ireland wicketless for two sessions, the taking of the new ball in the final session brought a dramatic turnaround in Irish fortunes.

The dismissal of Emirati skipper Khan, trapped lbw by Trent Johnston (1-39) in the first over with the new ball for 115, saw a resurgent Ireland seize the initative once again.

Khan’s innings occupied 232 balls, as he combined resolute defence with excellent shot selection, putting away anything remotely loose, as evidenced by his boundary count of 17.

He found the perfect partner in Arshad Ali, who was patience personified in his 95 from 271 deliveries (10 fours). He benefitted from a reprieve on 42, when on the brink of lunch, he was dropped by a diving Gary Wilson in front of first slip following a rare shot of aggression.

Three hours later, his dismissal, caught by Tim Murtagh at mid-on off George Dockrell (2-97) came as a welcome relief to the Irish camp, and their joy increased when Shaman Ainwar fell to Dockrell from the next delivery, palpably lbw not playing a shot.

Swapnil Patil (50*) and Saqib Shah (21*) frustrated Ireland’s quest for a further breakthrough before the close - the pair adding an unbroken 54 as their side closed on 302 for 6. They are still a long way from avoiding the follow-on target of 440, and 287 behind Ireland’s record total.

John Mooney, who was returning to the team after eight months out with injury, was glad to be back in Irish colours: “It was of course very pleasing to get a few wickets but to be honest I’m just happy to be back playing having been out since July. It was great to get those five wickets in the final session and a real team effort.

“It was a tough slog out there. I think we got our reward for sticking with it pretty much all day, except for a sloppy 30 minutes before tea. Simmo (Phil Simmons) gave us a reminder at the interval of what we should be doing and things changed quickly. We were helped by the fact that we had a new ball and also getting the breakthrough with the dismissal of Khurram. He’s a good player so getting rid of him was massive for us.

“The ball did reverse earlier on today but the two batters were set and played really well. We’ll be hoping to get the four remaining wickets as early as possible and probably send them back in. The pitch is very flat and getting the wickets we need for the win is going to be very difficult.

An exhausted George Dockrell - he’s bowled 37 overs in the innings thus far - was clearly relieved that Ireland bounced back after two barren sessions. “It’s the toughest day I’ve been involved with playing for Ireland. The deck is particularly hard on the bowlers. There’s nothing there for the seamers - the ball might swing for an over or two but them it softens and there’s no movement at all. Spin wise I’ve only turned one all day, out of the rough.

“I was more expensive than I’d have liked - I just bowled too many bad balls - in a game like this I’d be aiming to concede two or less. After bowling so many overs with so little turn, I knew the key to getting wickets was all about building pressure. I didn’t bowl with enough discipline so I’m a bit disappointed with myself to be honest. Having said that to get the two wickets towards the end of the day was a huge bonus.

“On this track you need to get batsmen early on in their innings. Once they settle and get past 20, it’s difficult to get them out as you saw with our guys when they batted. The batsmen tend to be nervous at the start until they settle so you can get wickets in clusters as we did in that final session.

“The way the pitch has played and been prepared it’s going to be hard to get a result, but we’ll come out hard in the morning and do our upmost.”