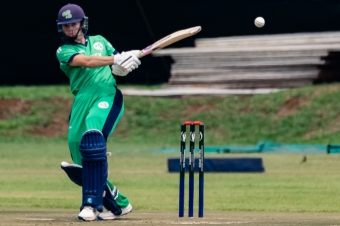 HARARE, Zimbabwe – A 79-run opening stand by Gaby Lewis and Leah Paul, and the all-round performance of Eimear Richardson weren’t enough for the Ireland Women’s cricket team to overcome the West Indies in Harare today.

After losing the toss and being asked to bat first, Ireland’s openers Lewis and Paul began the innings cautiously. Overnight rain had left conditions damp and muggy, with both captains expecting early batting to be difficult. However, the Irish pair defied expectations and set about establishing a solid opening stand. Left-hander Paul was patient in defence, while right-handed Lewis looked to gradually increase the scoring rate with a mixture of firmly struck and finessed boundaries - and one eye-catching maximum off Hayley Matthews.

The pair were pushing along at four-runs an over until in the 20th over Lewis struck a well-timed off-drive off Anisa Mohammed, which the off-spinner plucked out of the air, one-handed inches from the grass. Lewis’ 36 from 58 balls may have settled any opening-game nerves amongst her teammates, but her demise could be considered highly unfortunate as it came from a 7th ball of Mohammed’s over, which was not picked up by the on-field umpires.

This breakthrough set off a batting collapse which saw the momentum of the innings shift dramatically. From 79-1, Ireland lost five wickets for just 23 runs in the next seven overs. Amy Hunter was run out before she could score, and was soon followed by Paul who was bowled behind her legs, out for 25. The middle-order offered little resistance until Eimear Richardson (32) was joined by Mary Waldron (12), and the pair sought to stabilise the Irish innings.

Waldron looked solid, cracking a boundary through the covers, but fell leg before wicket the next ball. Richardson found some support from Celeste Raack with the pair pushing the score beyond 150, but the introduction of West Indies captain Stafanie Taylor to the bowling crease saw Richardson and Georgina Dempsey depart in consecutive balls, and the innings was soon wrapped up – Ireland finishing on 159 from 42.5 overs. Needing early wickets to put pressure on the chasing side, the Irish bowlers could only watch on as the experienced West Indian opener Deandra Dottin hit out early. With rain threatening, the West Indian batters sought to stay ahead of the DLS score, and brought up the 50 in the 11th over. A deflected run out of Rashada Williams (8) – left stranded at the non-strikers end – gave the Irish side some distant hope, before the rain eventually arrived and forced players to leave the pitch after 14 overs with the Caribbean side on 63-1.

It was Player of the Match Dottin’s day, though, with the 30-year old Barbadian opener hitting eight fours and a six in an innings of 73, finally falling to a well-held caught & bowled by Richardson.

With Dottin’s demise, Taylor took up the reins and guided her side home by 6 wickets with 63 balls to spare.

After the match, Irish captain Laura Delany maintained a determined and focused perspective:

“We wouldn’t be here if we didn’t want to qualify - we’re only one game into the tournament, and still have two games to play. We have yet to play our best cricket, so I’m looking forward to the next two games.”

“I was really happy that we took it into the 40th over, and our spinners put in a really good spell in the middle overs – hopefully in the next game we can take a couple of early wickets and put a little bit more pressure on our opposition.”


Ireland’s next match is on Thursday at the same venue against Netherlands.