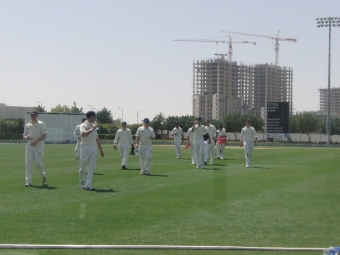 The winter cobwebs have been blown away for the Ireland squad and it all eyes ahead for a vital ten day’s cricket ahead for Ireland in the Emirates, as they look to consolidate their advantage at the top of the ICC Inter-continental Cup & ICC World Cricket League Championship Tables.

In keeping with the warm-up feel to the two day match, there was no official result stated but Ireland will be happy with every member of their squad getting a good work out. So the ‘scores’ on the pitch? Well, Canada batted throughout the day making 295 runs, tempered by the 13 wickets taken by Ireland’s bowlers.

With it being 6 months since Ireland had taken the field together it was always going to be a slow return to action, but Phil Simmons and his coaching staff will be happy with several of the Irish bowlers used looking impressive and getting among the wickets.

Eight of the nine Irish bowlers picked up at least a wicket with Trent Johston leading the attack with a three wicket haul, 3 for 27 from 11 overs. Given the conditions being so suited to spin it was no surprise to see all three slow bowlers being economical and penetrating. George Dockrell was particularly impressive bowling 16 overs taking 2 for 17, whilst Paul Stirling and Andrew White’s off spin claimed 2-32 and 2-30 respectively.

All of Ireland’s squad of 14 are available for selection for Tuesday’s ICC Intercontinental Cup Match against the hosts, UAE. Ireland trained today in Sharjah and they will make the short journey across to Sharjah from Dubai tomorrow morning where they will stay for the next two weeks.

The importance of three wins will not be lost on anyone in the Ireland camp and they know they could be returning home in two week’s time with a spot on in the 2015 Cricket World Cup and another Intercontinental Cup close to being secured if all goes well.

All three games will be live scored on www.cricketireland.ie.