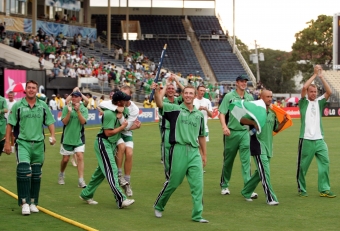 Ireland return to the scene of one of their finest hours when they take on the West Indies in two T20I’s and an ODI in Jamaica this week, the matches will provide perfect preparation for the ICC World Twenty20 next month in Bangladesh.

Sabina Park was the scene of their historic three wicket win against Pakistan on a never to be forgotten St Patrick’s Day 2007. The biggest shock in World Cup history announced Cricket Ireland to a global audience, and success after success has followed as cricket in Ireland has enjoyed an exponential growth in the subsequent seven years.

“For many, that St Patrick’s Day win was where it really all began,” said Ireland captain William Porterfield. “It’s hard not to think of that game without smiling. It was just the most incredible fairly-tale story that day. It had all the elements of a real thriller, with us bowling and catching superbly. We then lost early wickets before Niall (O’Brien) played the innings of his life to get us close. Trent (Johnston) then sealed the win with a six to spark the mother of all parties! William Porterfield points the way at Sabina Park in 2007 at the World Cup.

“Fast forward seven years and we’ve come a long way. It’s been trophy after trophy as we’ve dominated Associate cricket and qualified for every global event since then. If there’s one regret, it’s that we haven’t recorded even more wins against Full Members. We’ve gotten ourselves in some very strong positions but faltered at the last moment. That’s something we’re keen to rectify, hopefully starting this week in the games against West Indies.”

It won’t be easy for the Irish, as their opponents have recalled the formidable trio of Darren Sammy, Marlon Samuels, and the most destructive batsman in world cricket - Chris Gayle.

Ireland coach Phil Simmons is aware of the size of the task facing his charges, but is confident they won’t be overawed. “It’s certainly going to be difficult but we’ve put in a lot of hard work and also played five matches over the past few weeks so we’re well prepared. We’ve had mixed fortunes in those matches but did have an excellent win against the Windward Islands. It’s that sort of form I’ll be looking for.

“The batting hasn’t really fired for us in the Caribbean although Paul Stirling has been pretty explosive in the last warm-up matches. We’ll be strengthened by Ed Joyce joining up with the tour party as he’s an incredibly experienced campaigner.

“If we can bring our A game to the table, then we’ll always have a chance, especially if they don’t fire on all cylinders. It won’t be easy against the World Champions, but we’ve played excellent Twenty20 cricket in recent months, especially in the closing games of the qualifiers in the UAE in November.”

Ireland’s last two meetings against the West Indies in the T20 format have both been in ICC World Twenty20 finals. In 2012, Ireland scored 129 for 6 before the game was washed out. The West Indies went on to become champions after beating Sri Lanka in the final. In 2010, George Dockrell took 3 for 16 to restrict West Indies to 138. However Ireland could only muster 68 to fall to a 70 run defeat.

Their last one-day meeting came during the 2011 World Cup when half centuries from Ed Joyce (84) and Gary Wilson (61) put Ireland in a strong position at 177 for 3 as they pursued 276 for victory, before falling 44 runs short.

Irish encounters with West Indies will obviously conjure up images of Sion Mills in 1969 as the tourists were skittled for a scarcely believable 25.

Ireland will be hoping for another famous day in their three encounters this week. The Twenty20 action begins tomorrow (WED) at 7pm (UK/Ireland) with the second match at the same time on Friday.

The ODI is on Sunday at 1:30pm (UK/Ireland) and fans can watch the action via a live stream on the West Indies website www.windiescricket.com or follow the live scorecard and live updates with us here on www.cricketireland.ie

The squads in full are as follows: