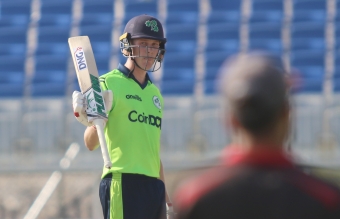 It was the Muhammad Waseem show as the UAE opener plundered his second T20I career century – both against Ireland. Waseem’s 112 came from just 66 balls, as he led the Emerati side to a comfortable 7 wicket victory with 8 balls to spare.

For the Irish bowlers it was slim pickings, with the best return being the paceman Josh Little who took 2-17 from his four overs.

Given today’s result, Ireland will enter the First Round Group Stage of the ICC T20 World Cup in October facing West Indies, Scotland and one further qualifier (TBC in June) in Group B. Two from that Group will move to the Super 12s stage of the tournament (see draw).

Earlier in the day Irish skipper Andrew Balbirnie won the toss and decided to bat first, but despite a burst of 11 runs from the first over, both Balbirnie (4) and opening partner Paul Stirling (12) were back in the pavilion shortly after, with Gareth Delany (1) falling in between. Whether the top order felt the pressure was off today after qualifying for the World Cup on Tuesday or had simply decided to attack early, the three wickets were loose-looking shots which left Ireland at 19-3 in the fourth over.

Harry Tector and Lorcan Tucker (20) sought to stabilise the innings with a 43-run stand, but Tucker was caught in the deep from an impatient shot, trying to up the run rate. After Andy McBrine and Simi Singh came and went cheaply, Shane Getkate joined Tector and the pair put on 55 for the seventh wicket from just 36 balls. Getkate surpassed his previous highest T20I of 24 with a mighty blow over the mid-wicket boundary, but fell soon after, bowled by a leg cutter from Zahoor Khan.

Tector brought up his second T20I half-century from just 36 balls, but after reaching 50 the in-form right-hander fell to a diving catch in the outfield by Basil Hameed.

Mark Adair (20 from 15 balls) and Barry McCarthy (15 from 6 balls) added late runs, and Ireland was eventually bowled out for 159 off the last ball of the innings, with the 48 runs off the last five overs pushing the score to a par score, which unfortunately wasn’t enough on the day.

After the match captain Balbirnie said:

“We’re disappointed today, but UAE were probably the best side in the tournament, so congratulations to Ahmed and his squad for the week. We had a good powerplay with the ball today, but when someone scores a century striking at nearly 200 it’s hard to stop. That was the difference today.

“There’s a lot of pleasing aspects of how the week has gone, we obviously qualified for the world cup, which was the main aim – however, when you play a final you want to win the trophy, but the best side won today.

“We’re really looking forward to going to Australia, it’s a great place to tour – a few of us have been there before, we’re excited by that challenge and hopefully we have a big summer ahead.

Asked about interim head coach David Ripley, who led the squad for the last time today, he said:

“He’s been a blessing to have come in at such a tricky time, between coaches, but to have had the impact he has had, he’s a great man, someone we have a lot of time for – and he said just there in the change room that he’s an Irish man for life now, which is great.”