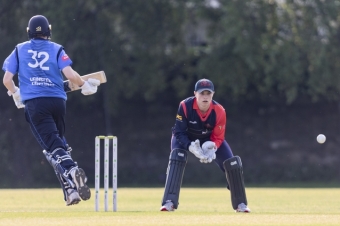 Neil Rock will captain the Men's Academy side.

A squad from the Shapoorji Pallonji Cricket Ireland Academy has arrived in England ahead of two 50-over fixtures against England Under-19s. The Irish side features current members of the Ireland Wolves and Ireland Under-19s squads, and is led by Northern Knights and Rush wicketkeeper-batsman Neil Rock.

“We’re delighted to have been invited to play at such a fine facility as Loughborough. This is the training centre of excellence for England Cricket and is certainly buzzing after yesterday’s World Cup victory.”

“These two sides met on our pre-season tour of Bristol earlier this summer, where our Academy squad put in an excellent performance to win. However, we expect a much tougher task this time around as England Under-19s prepares for their upcoming Tri-Series with India and Bangladesh. There is no doubt that they have a talented and athletic squad with bright futures, but our young cricketers are beginning to close the gap on other Full Member sides at under-19 level - and the more exposure we can get to top sides will only help speed this process up.”

“These fixtures will give eight of our under-19s experience against a Full Member under-19s side for the first time outside of a World Cup, which is a hugely positive step and one we want to build upon. We have also been able to include some players who are over-age but still very young and also mostly part of our Academy. This includes Gareth Delany who has just made his T20 International debut for Ireland, while fast bowler Mathew Foster of the Northern Knights and CSNI comes in for his first Academy appearance and it will be a great opportunity for him to show what he can offer with the ball.”

“The Ireland Under-19s put in some very encouraging performances against Worcestershire Academy last week in their series win, and Neil Rock - who captained the Under-19s - will again captain the Academy side on this tour. We are all looking forward to the games which will provide another great opportunity for all players to face quality opposition in fine facilities.”