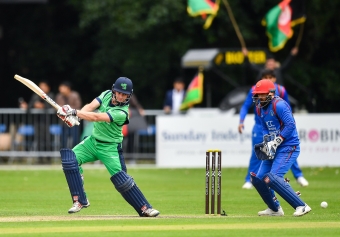 William Porterfield will lead the ODI squad against Afghanistan

The squad named is for the following matches:

“The first few months of 2019 have shown the talent and potential within Irish cricket, and the emergence of new players on the international stage. Indeed in just the first half of this calendar year we have seen five players make their ODI debuts. With Tyrone [Kane] joining the squad for the Afghanistan series, he is in contention to be a sixth ODI debutant.”

“We have not shied away from the fact that our senior men’s international squad is in a transition period. This is not an overnight process, and it will take time and patience to bring through new players into the international set-up. Given the quality of opposition we have been playing of late – England, West Indies and Bangladesh here at home, and Afghanistan in India – the Selectors have been pleased with the way these younger players have adapted to the challenge and shown a willingness to learn – both skills-wise and mentally.”

“Our objective is to build a squad, and expand the talent pool, that is capable and confident of playing at this level, and we cannot rush this process.”

“We have also been pleased to hear from our recent debutants how invaluable it has been to come into a side with a cohort of experienced professionals to learn from. Through seeking out advice, or simply being able to observe how the senior lads prepare and approach their game, the opportunity to have mentors and role models within the squad is immeasurable.”

“We have recently seen some fantastic batting performances against quality bowlers led by some of the more senior players – including some big centuries which are needed at this level to build competitive totals or to chase down big targets.”

“The bowling unit has shown glimpses of what we are working towards – and feedback from coaching staff is that given we don’t have the out-and-out pace or mystery spin variations of other top sides, we are working very much on the ability of our bowling unit to perform more consistently with a disciplined line day-in and day-out against world-class opposition batters. However, what is most important at this stage is for each player to understand their role in the squad, maximise opportunities to play to their strengths and gain greater confidence through playing more games and being within a supportive environment.”

Looking forward to the second half of the international season, White said:

“Following the Afghanistan series there is a natural break in the international calendar before we take on Zimbabwe in July. During this interim period we will have the chance to not only watch the Inter-Provincial Series, but also watch a competitive six-match series between Ireland Wolves and Scotland A in June. These games are essential in providing players the opportunity to put their hands up through consistent performances with bat or ball.”

“During the Tri-Series Josh reported some minor back pain related to bowling. A precautionary scan showed a small area of bone stress in an area commonly seen in fast bowlers. We take these findings very seriously given the potential for such stress responses to develop into a more serious stress fracture that could put Josh out of action for up to 3 months if he were to continue bowling. We want to rest Josh from bowling for around four weeks and begin rehab immediately in preparation for the Zimbabwe series at the beginning of July.”

Patrons can pre-purchase tickets online through Ticketmaster or at the gate. Adults £15, children under-16 go free. Two-match packages are also available for adults at £20.