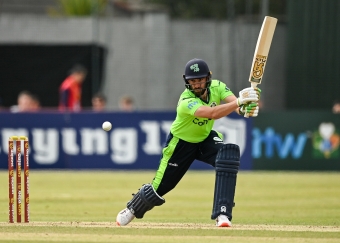 Andrew Balbirnie drives a ball through the covers

DUBLIN – The International Cricket Council (ICC) today confirmed the details of the first of two Men’s T20 World Cup Qualifier tournaments which will feature Ireland – essentially outlining the qualification pathway to be on the plane to Australia for the 2022 ICC Men’s T20 World Cup later this year. In addition, three warm-up fixtures have been confirmed ahead of the Qualifier.

The ICC Men’s T20 World Cup Qualifier A will take place between 18-24 February 2022. The top two teams from this Qualifier event progress to the ICC T20 World Cup in Australia in October-November 2022.

The fixtures for Ireland in the Qualifier Group Stage are:

Top two teams from each Group progress to a semi-final, with the two winners of the semi’s qualifying for the T20 World Cup.

Ahead of the Qualifier tournament, Ireland Men will play three warm-up matches:

“It’s been a short, but welcome break for the squad after getting home from the Caribbean. I know the lads have spent the time recharging after a long and challenging tour, but now are gearing up ready to get back out there.

“Our T20 results haven’t been where we’ve wanted them in recent times, so we’re keen to rectify that in this a T20 World Cup year. We are keen to put in consistent performances that warrant being at the top table of T20 cricket. This trip is a good place to get the ball rolling for hopefully a really important year.”

The squad consists of 14-players, with two additional travelling reserves as part of the tournament’s COVID protocols.

The squad will leave Dublin for Oman on 4 February.