May 15th 2013 by Cricket Ireland | International 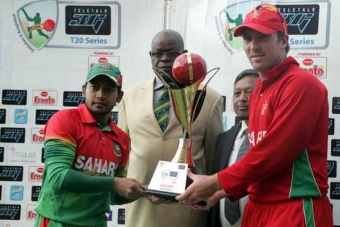 Ireland have moved up to ninth in the Reliance ICC T20I Rankings after Bangladesh could only beat Zimbabwe once in their two-match series on May 11th and 12th.

Bangladesh needed to win both T20 Internationals against the lower ranked Zimbabwe to maintain their status above Ireland. Zimbabwe, who are 11th in the rankings, won the first match by six runs. Batting first in the first game in Bulawayo, the home side posted a competitive total of 168-5. Bangladesh lost eight wickets in the chase, two in the final over when they needed 10 to get over the finish line with a win.

Bangladesh were cruising with a second wicket partnership of 118 between Shamsur Rahman and Shakib Al Hasan but when both were dismissed in the 15th over by Prosper Utseya, the wheels came off. They lost a further five wickets for just 38 runs in the final five overs.

The visitors came back well the following day at the same venue of the Queen’s Sports Club when they batted first and posted the exact same total Zimbabwe had in the first game, while losing a further two wickets. The home side did not get close, losing wickets too regularly to be in with a chance of reaching the total they had scored the day before and they ended with 134 for 9, well short of Bangladesh’s total

Bangladesh now have 76 rating points, six less than Ireland’s 82, next up in the rankings table are New Zealand but they stand 16 points clear of Ireland on 98 points.