Ireland Name Under 15 and 17 Training Squads 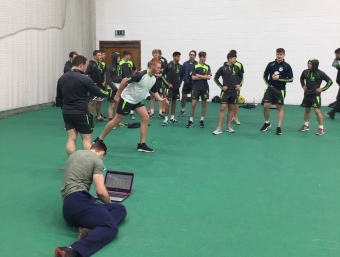 Cricket Ireland have named both their Under 15 and 17 winter training squads ahead of a busy schedule in 2018.

20 players have been named at Under 15 level and Lead Coach Brian Allen is happy with the talent that he and his fellow coaches will be helping grow and progress.

“As a coaching team we are very happy with the players who have made the squad, congratulate them and look forward to working together,” said Allen. “I can’t wait to get under way and assist the development of what are now potential test stars.

“We are excited to get this talented group of players together and as usual it’s far from an easy choice deciding who is included at this stage.

“There are numerous really talented cricketers not on this squad which we will also be keeping a close eye on and invite along to join us where possible so there is always room for players to reclaim their place,” added Allen.

There’s also a very talented batch of young cricketers at Under 17 level, and Lead Coach Nigel Jones can’t wait to help mould the next generation of Irish senior cricketers.

“I’m excited by the potential and balance of this squad,” said Jones. “Along with my fellow coaching group, we believe that we have selected an exciting group of players who will benefit greatly from an intense winter programme ahead of a busy 2018 schedule.

“The profile of the squad sees no fewer than eight players returning from the 2017 match programme and in addition to this we have named nine players who are effectively a year young qualifying for U16 level.  We believe that their (U16) development will be further supported by the returning squad players, who are essentially responsible for continuing to drive squad standards and culture, pushing this exciting group forward throughout 2018.

“I’d like to take this opportunity on behalf of the Ireland U17 coaching management group to congratulate those who have been selected and to wish them well with the winter programme ahead,” concluded Jones.