Ireland Name Under 17 And 19 Youth Squads 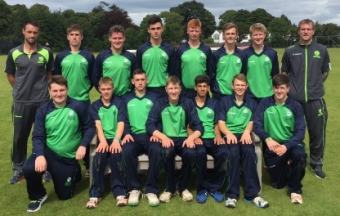 Cricket Ireland have named both their U19 and U17 Winter Training squads ahead of a crucial period for the age groups.

2017 is particularly vital for Ryan Eagleson’s Under 19 side as they attempt to qualify for the 2018 ICC U19 World Cup in New Zealand.

The former Irish international has named a squad of 18 for the winter programme, including Ireland’s latest cap - left-arm paceman Josh Little from Pembroke.

“With the 2018 Under 19 World Cup in New Zealand the prize, a big summer lies ahead for the squad,” said Lead Coach Eagleson.

“The qualifying tournament will take place in August with the winner getting the “golden ticket” of a place at the World Cup so there is so much at stake.

“Harry Tector, Josh Little and Varrun Chopra played at this year’s World Cup in Bangladesh so they know what to expect at that level. There is good continuity within the youth set-up with 12 members of last year’s successful under 17’s named in the group.”

Ireland have also unveiled the Under 17 squad, with Lead Coach Nigel Jones and his fellow coaches naming 19 players for the winter schedule.

The squad is clearly a talented group with no fewer than eight players also included in the older Under 19 squad as well.

Jones is excited at the talented grouping and is expecting strong performances from his young charges in the coming months.

“I along with my fellow coaching group believe that we have an exciting group of players to work with,” said Jones. “There are no fewer than eight players returning from the 2016 Ireland U17 programme and in addition to this we have named nine players who are only 16 years old and eligible next year as well.

“We believe that their development will be further supported by the returning squad players who will be responsible for setting the standards and pushing this exciting group of players forward into the 2017 season.

“I’d like to take this opportunity on behalf of the Ireland U17 coaching management group to congratulate all those who have been selected and to wish them well with the winter programme ahead.”