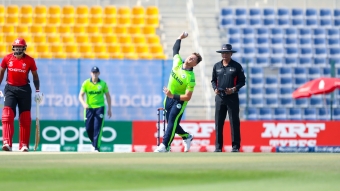 Kinchit Shah then came to the crease and proceeded to power to his highest T20I score of 79 from 54 balls. Shah played all around the ground, combatting the Irish bowling by shuffling around the crease and hitting through the line, especially against the pace bowlers.

The Hong Kong batters turned the strike over regularly, but couldn’t find a way to hit regular boundaries – thanks in large part to an Irish attack using change-up balls, and varying their pace and length well.

Mark Adair led the line taking 2-22 from four impressive overs, and was well supported by Boyd Rankin who bowled a miserly 0-18 from 4 overs. They were backed-up by the spinners Gareth Delany (1-23 from three overs) and George Dockrell 0-21 from three overs who applied the screws in the middle overs.

In response, Ireland started with a blast – Paul Stirling smashing a six off the first ball – but lost Kevin O’Brien in the first over, run out without facing a ball.

Andy Balbirnie joined Stirling and the pair piled on the runs. Stirling was the chief aggressor, bringing up his 14th career T20I half-century from just 26 balls, while Balbirnie played a number of classical cricket shots and ticked over at a run-a-ball in support.

The two batsmen put on an 86-run stand from 60 balls, but on 62, Stirling miscued a drive and was caught. Image: Harry Tector plays the ball during his innings of 21*

However, the run onslaught did not abate, as Balbirnie and the incoming Harry Tector (21*) continued the run chase in style. Balbirnie passed the 50-mark as well – his fourth T20I half-century - and his 70* from 53 balls led Ireland to victory by eight wickets.

Player of the Match Paul Stirling said after the game:

“It’s nice to get a first win on the board, hopefully we can go on from here and keep winning. It was nice to get off to a quick start, you always feel like you’re in control of the innings when you get off to a quick start like that. It’s a very nice pitch, you always expect a good one at the start of a tournament when they’re fresh – especially in the afternoon when the sun comes out.”

“I don’t think we played our best cricket, to be honest. The pitch played a lot slower than we had hoped. We had to go to our cutters early, which we found to be effective. We’ve learned a lot, and we still have three more games to play in this stadium, so it’s great to win a game when we feel we haven’t played out best. A clinical chase from the boys, I thought Paul [Stirling] was excellent, and Andrew [Balbirnie] has been doing that for us for the last number of years. He’s probably not your belligerent T20 batter you’re used to seeing around the world, but his strike rate is right up there just from playing good cricket shots.”

“We look to our next game against the UAE, if we play our best cricket then we’ll be OK. If we aren’t at our best, then these other teams are good enough to beat us. It’s a case of a thinking a game at a time, if you look too far ahead in these tournaments you can come unstuck.”