Ireland opt for experience ahead of crucial UAE tour 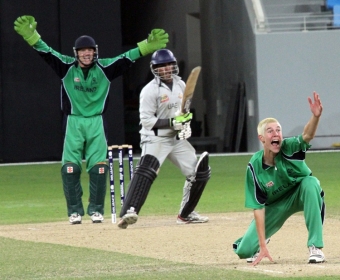 George Dockrell will be looking for more success against UAE

Cricket Ireland have named an experienced squad of 14 ahead of their crucial tour of the UAE next month. John Mooney returns following his hand injury and is joined by Instonians batsman James Shannon, who is preferred to Eglinton all-rounder Stuart Thompson.

No fewer than twelve of the squad featured in the recent ICC World Twenty20 in Sri Lanka.

Ireland coach Phil Simmons said of the squad composition: “It’s pretty much among expected lines. These games are vital in our quest to gain one of the two automatic World Cup qualification places. When the pressure is on, I’ve found there’s no substitute for experience. Nine of our squad have played for their country 100 times or more, and eleven of them have World Cup experience.

“It was a difficult decision to leave out Stuart Thompson, but the selectors felt we had enough seam bowling all-rounders in the squad already, so we went for the extra batting cover that James Shannon provides. He’s worked incredibly hard and deserves his chance having missed out on the tour to Sri Lanka.

“The conditions are going to be tough and UAE have shown they’re difficult to beat on home soil with the wins last year against Afghanistan. We’ve an excellent track record against them though, and I’d be confident of picking up the wins we need to stay top of both tables.”

Ireland have organised an intensive camp and a two-day match against Canada in the run-up to the vital games. Cricket Ireland Performance Director Richard Holdsworth explained: “We have set up a nine-day preparation camp in the UAE prior to the Intercontinental Cup match and subsequent World Cricket League Championship ODI’s.  The players will acclimatise and train at the ICC’s Global Cricket Academy in Dubai, and then benefit from some match practice in a two-day match against Canada prior to moving to Sharjah, where the players will train ahead of their competition matches.

“The programme has been supported by the ICC high performance programme, who will also hold specialist sessions and key planning meetings for our sports science and medicine support staff, coaches, performance directors and CEO’s.”

The Ireland squad in full is as follows:

The fixtures are as follows: