Ireland outplayed by powerful West Indies side in third ODI 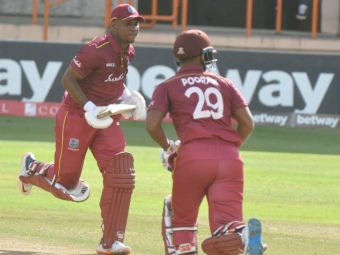 ST. GEORGE’S, Grenada – Ireland Men’s cricket team have fallen to a 5-wicket loss to the West Indies after Player of the Series Evin Lewis hit a superb century in the third One-Day International in Grenada today.

Overnight showers freshened the pitch up and both sides were looking to bowl first if they won the toss. The toss went the way of the home side, and Ireland were duly asked to bat first.

Ireland had made two changes to their line-up, with James McCollum coming in for his first appearance on the tour for Gareth Delany, and Boyd Rankin rested with a niggle, with Craig Young coming in.

Almost from the outset, the Windies bowlers grabbed the upper hand. Paul Stirling became frustrated with a slow start and was dismissed for 5, flashing at a ball short of a length, and James McCollum – after playing some eye-catching shots square of the wicket – fell for 20, offering a simple catch to cover.

Ireland needed a batter to settle the visitors down and captain Andrew Balbirnie became that man. His 71 from a patient 93 balls was Ireland’s highest individual score of the series, and he looked quite relaxed and confident throughout. He will be disappointed that he couldn’t turn his 9th ODI half-century into three-figures, but he did play the long game needing his teammates to build an innings around him.

Unfortunately, that wasn’t to happen and regular wickets fell, with Ireland bowled out in the 50th over for 203. Andy McBrine’s late 25* from 22 balls put some respectability into the score, but the Irish total was around 50 runs below the par score at this ground. In response, despite three breaks for rain, the home batters completed the run chase in style with 10.4 overs to spare. Player of the Match Evin Lewis led the charge with his third career ODI century – 102 from 97 balls. The left-handed middle-order batter Nicholas Pooran again impressed with the bat and finished with 43*, while Brandon King hit a confident 38.

With the final rain delay, three overs were declared lost and a revised target of 197 was set, but the Windies batters achieved the target with more than 60 balls to spare.

For Ireland, Simi Singh was the most economical with 1-29 from 10 overs, while Andy McBrine claimed 2-50, and a wicket apiece went to Barry McCarthy and Craig Young.

Evin Lewis was also named Player of the Series for his 99* and 102 in the 1st and 3rd ODIs respectively.

“That has sort of been the trend of our series, we’ve managed to get in and build a platform but haven’t been able to kick on at the back end of the innings. When you’re playing a team as good as the West Indies and you don’t put up scores of 250+ or 300 then you’re up against it. We were outclassed today but we can definitely take improvements out of three games.”

“I’ve been really impressed with the way our bowlers have gone about it, particularly Simi Singh who has had a brilliant series, bowling very economically with spin. We don’t have the quickest bowlers in the world, and we don’t have the biggest turners, but what we can do is that we can be accurate and we’ve got to work as hard as we can in the nets to be able to be disciplined to hit an area and I think if we can do that we can be a lot more competitive as we go around the world.”

“The second game was a big positive, we still look back at that as a chance we missed. We had our chances to win that game, and when you’re at this level that little bit of composure can be very useful, but unfortunately we just didn’t have that. We’ve played competitive cricket and would have liked to come away with a win, but the West indies are an in-form team with some power in their side - we’ve a lot of cricket coming up in the year ahead, so if we can continue to make improvements each game then we’ll be the better team for it.”

“It’s a big year in T20 cricket for all international teams - we have that world cup at the end of the year to look forward to. So heading into the T20 series here we have three guys coming into the squad and they’ll bring a bit of freshness to it. We’ll probably have a day off tomorrow then look to tackle it the next day going into the series.”

Congratulations to @windiescricket for the win today, and 3-0 series win.