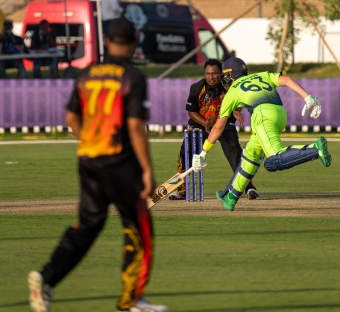 Andrew Balbirnie completes a run during his innings of 42*

After PNG won the toss and chose to bat first, Craig Young made Ireland’s first breakthrough with the dismissal of Tony Ura for 2 in the second over, and Charles Amini then fell for 4 to Simi Singh in the final over of the powerplay. Sese Bau and Assad Vala – the skipper who top-scored with 32 – strung together a partnership of 23, but regular breakthroughs meant the PNG innings never caught fire.

Ben White fired in a wide delivery to have Bau stumped for 12 in the 12th over, and the leg-spinner removed Vala minutes later for his second. Jason Kila was White’s final victim, bowled for 2 after failing to connect from his sweep. Mark Adair and Young joined in on the fun of targeting the stumps, with the remaining three wickets in the innings all bowled.

PNG finished on 96-8, with White the pick of the bowlers, returning figures of 3-10 from four overs. Young too claimed a three-for, conceding 15 runs.

With the bat, Ireland lost Kevin O’Brien and Gareth Delany in the powerplay – aiming to go big over the off side, O’Brien (8 off 12) chopped on; Delany (5 off 7) was cleaned up by Simon Atai after failing to connect with a late cut.

But Andrew Balbirnie and Curtis Campher took Ireland home with a substantial unbeaten partnership of 71, with both batters finishing on 42 not out. While the Ireland captain was more patient in batting for 46 deliveries, Campher provided power, cracking three fours and two sixes during his 35-ball stay.

Ireland’s final warm-up match ahead of the World Cup takes place on Thursday against Bangladesh in Abu Dhabi.

After the game, captain Balbirnie said:

“It’s always nice to get a win and put in a solid performance all round. The pitch was a slow, low and tired wicket, but our bowlers were very accurate throughout and executed their bowling plans well.”

“My foot is fine, it’s still not pain-free, but certainly having a clear X-ray has been a great boost knowing that not much more damage can be done. I just have to remember, it’s better to use your bat rather than your boot.”