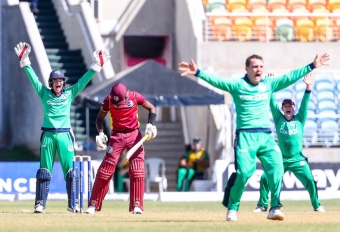 KINGSTON, Jamaica – Ireland Men have won their first-ever one-day international series away from home over an ICC Full Member after recording a two-wicket victory over the West Indies at Sabina Park in Kingston today.

For the third time in succession, Ireland won the toss and chose to bowl first. Stand-in captain Paul Stirling named an unchanged line up for the match, however, the early exchanges did not go to script for the Men in Green. Shai Hope – who had under-performed so far in the series with scores of 17 and 29 – went on the attack, blasting balls to all areas of the ground. Hope was particularly aggressive with Josh Little, feeding off the extra pace and width on offer.

He brought up his half-century off just 37 balls, with 9 fours and a six, but just as he threatened to take the game away from Ireland he mis-timed a hook shot from a Craig Young bouncer and was caught by Josh Little at fine leg.

That dismissal brought about a middle-order collapse with West Indies losing 7-57 in the next 17 overs. Young claimed two wickets, but the chief destroyer was off-spinner Andy McBrine. Fresh off his Player of the Match 4-25 in the last ODI, McBrine was again hitting the right areas from the off. He had Nicholas Pooran and Shamarh Brooks both trapped in front, and set a leg slip trap for a lunging Kieron Pollard, who dutifully edged a ball to William Porterfield who claimed a diving catch.

George Dockrell chimed in for a wicket to snare the dangerous Romario Shepherd – Dockrell’s 150th List A wicket – and the home side’s innings was seemingly adrift at 119-7 in the 28th over.

It was then that former West Indian captain Jason Holder took the reins – he and Akeal Hosein put on 63 for the eighth wicket in a face-saving stand for the Caribbean side. Holder played across the line of the ball repeatedly but effectively as he hit six boundaries, and was looking comfortable moving into his 40s, but he took on the arm of an outfielder one too many times and was run out going for two. Gareth Delany with a superb flat throw from deep square leg and Neil Rock’s quick hands catching the tall Barbadian all-rounder short of his crease.

Big-hitting Odean Smith threatened to let loose again after his 19-ball 46 in the last match, carving out 20*, but when Alzarri Joseph fell for 6, the West Indian side were bowled out for 212 in the 45th over - the third time in the series Ireland has dismissed the home side before they batted out their allotted overs. This is the first time Ireland Men have bowled out a Full Member in three successive matches.

Bowling honours once more went to Andy McBrine – the Donemana off-spinner finished with 4-28 from 10 overs. McBrine’s series haul of 10 wickets at 11.6 apiece was an excellent return. Having lost fellow spinners Simi Singh and Ben White for the series due to Covid infections, Ireland needed McBrine to stand up – and that he did, with two four-wicket hauls the last two matches.

The North West bowling contribution in this series wasn’t only McBrine’s return - his North West Warriors teammate Craig Young claimed three wickets in each of the three matches of the series at 15.66 apiece to also play a key role.

With 213 the target, Ireland lost opener Porterfield from the first ball of the innings – upper-cutting a ball from Joseph that flew straight to Hosein at Third.

While the West Indian side undoubtedly were buoyed by the early breakthough, Stirling sought to wrestle back momentum with a quickfire 44 from 38 balls. Aided by the more circumspect McBrine, the pair put on 73 for the second wicket from 77 balls. The interim captain played several of his classic shots – a flick off his pads for four, a flat bat lofted off drive over cover for four, and a majestic swivel pull shot over the square leg boundary for six just to highlight a few.

However, looking certain to register his 27th ODI half-century, Stirling missed a tossed up ball by spinner Hosein and was trapped in front. Given not out, the bowling side sought a review, which shortly after saw the Irish skipper walking back to the pavilion.

McBrine was joined by the in-form Harry Tector, and the pair settled in to ensure no cluster of wickets would ensue. Tector, who has scored six half-centuries in his last nine innings, looked assured as he stroked the ball through the off side and off his pads. McBrine looked increasingly confident as his innings grew and he brought up his second career ODI half-century from 89 balls. Shortly after, the left-handed McBrine flashed at a bouncing ball outside off stump and edged through to the keeper, out for 59, but the platform had been well-and-truly set.

Tector registered his third half-century of the series, but in heart-in-the-mouth fashion, a clatter of wickets fell late on with Ireland going from 190-4 to 208-8. It was nervous times for all Ireland’s fans as Mark Adair and Craig Young stood at the crease. Fortunately, Young steered the winning runs away to the boundary off Shepherd and the Men in Green had won their first ODI series win away from home against a Full Member.

Andy McBrine said after the game:

“It means a lot to the team – the last 3 to 4 weeks hasn’t been easy on us, but there’s a fighting spirit left in us and we showed that today.

“There was a nice bit of spin in the pitch today – I just had to change up my lengths and keep it as simple as possible and force them to make mistakes – and that has happened in the last three games.

“I struggled a bit to get my timing with the bat, I just ground it out and waited for my ball as much as I could. Harry and I kept things simple, we were always up above the required rate, so didn’t need to lapse into anything we didn’t need to.

“Player of the Series means a lot personally, but I’m firstly jus trying to contribute what I can to the team.”

After the match, Paul Stirling said:

“We’re delighted, it’s not every day we go on away trips and turn over a side like the West Indies. Really proud of the lads that we can go 1-nil down in the series and come back to win the next two games and take the series. We may have been fortunate to win the toss three times, but we still had to go out and perform, so we’re delighted. We’re a pretty tight unit, we always have been, it’s one of our strengths.

“Harry Tector has been amazing – his consistency over his last 10 knocks has been outstanding, we hope he can continue that, but it’s not a time to put pressure on him. He has so much potential, it’ll come down to how much he wants it, and I think he does want it.

“Andy McBrine epitomises what an Irish cricketer should be – the heart he shows. It’s not easy to come back from being hit on the head, but he showed commitment and passion to help win us the game today – that partnership was key with Harry today, and all off the back of his bowling which has been magnificent.”