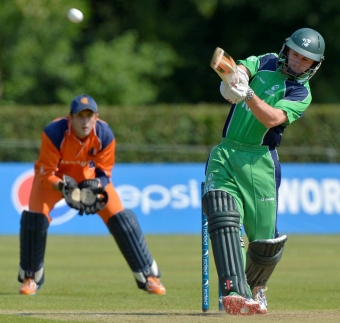 Ireland have qualified for the 2015 World Cup finals after securing the point they needed with an amazing tie with The Netherlands.

In a see-saw encounter in Amstelveen, Netherlands batsman Michael Rippon struck ten off the last two balls, including a last ball six, , to claim an incredible point for his team which keeps their World Cup hopes alive.

For Ireland however it’s yet another World Cup final - their third in succession- and another title at Associate level - their 10th in a quite remarkable six years of domination among their peers.

In a game where the pendulum swung throughout, a tie was actually a fair result and one in the final analysis both teams can be happy with.

Ireland had posted a slightly below par 268 for 5 on a beautiful batting track in idyllic conditions. Paul Stirling (49) and William Porterfield (30) had laid the foundation for a total approaching 300, but the late momentum never came, with both Kevin O’Brien and Gary Wilson going cheaply.

Trent Johnston hit an unbeaten 21 from 15 balls, but the mood at the half-way stage was that Ireland were going to have to bowl very well to defend the total.

The Netherlands top order all got starts, but none played the truly substantive innings required to win the game.

Wesley Barresi (46) again top scored, and with Daan van Bunge (45), Eric Szwarcynski (44) and Stephan Myburgh (35) all batting well, the Dutch were in control at 210 for 4 going into the final phase of the game.

The turning point came with the dismissal of Tom Cooper (38) to a stunning catch at midwicket by Porterfield, a period which saw four wickets fall for 12 runs.

However Michael Rippon became the hero for the home side with those boundaries which could prove crucial in the race for the last qualification spot, which is now between The Netherlands, Scotland and Afghanistan.

Ireland though are worthy World Cricket League champions, with two games to spare - both against Scotland in September.

Soon after the match An Taoiseach - Enda Kenny sent his ‘heartiest congratulations’ to the Irish team. See the full message here.

Before then England come to Dublin on September 3rd for the RSA Challenge at Malahide - what a celebration that should be at Fortress Malahide!

The scorecard in full can be found here.