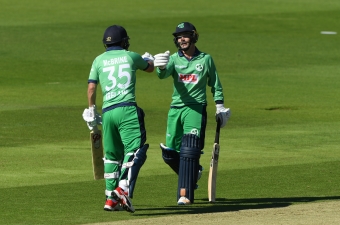 Ireland will look to bounce back in the second ODI

SOUTHAMPTON, England – Cricket Ireland’s national men’s selectors have chosen the 14-player squad for tomorrow’s second one-day international against England at the Ageas Bowl in Southampton, following yesterday’s win by England in the first match of the series.

“The Selectors are, of course, delighted with Curtis Campher’s debut – his positive play, composure under pressure and energy with the ball was very pleasing to see – to be making your debut against the world champions was highly pressurised, so for him to respond so well is a credit to his temperament and confidence to play at this level.”

“Barry McCarthy is unfortunately out of the next two ODIs after this morning’s MRI revealed a tear in a muscle at the back of his knee, while Boyd Rankin has been taken out of the 14 for tomorrow’s game as he manages a flare-up of an old back injury.”

“Coming into the 14 as a direct like-for-like replacement for Boyd is Peter Chase. Peter has been bowling really well in the nets, having made adjustments to his run-up over last 6 months, and has impressed coaches. George Dockrell completes the 14 given the all-round game we know he offers.”