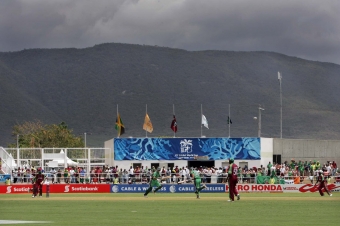 Ireland have been invited to travel to the West Indies to take part in their domestic 50 over competition, the Nagico Super 50.

PHIL SIMMONS is returning to his Trinidadian homeland with Ireland, who have been invited to participate in the West Indies domestic tournament - the Nagico Super 50.

The eight team competition sees Ireland drawn in Zone A alongside Guyana, The Windward Islands and Jamaica, with games scheduled to take place between January 30 and February 15.

“There’s no doubt that the matches will be of a very high standard and it’s a perfect platform for Irish cricket to show the West Indian public just how far their cricket has progressed in the past few years.

“The Caribbean holds a special place in Irish cricket history - for many this was where our unique journey started in 2007, and hopefully will be the catalyst that sees Ireland eventually be granted Test status by 2020.

Simmons, who played 169 times for the West Indies in Test and ODI cricket, is certain that his squad will prove themselves genuine contenders for the competition.

“We won’t be coming just to make up the numbers - we’re here to try and win the trophy, and while it will be difficult given the calibre of opponents, there’s no fear factor in Irish cricket any more. We have much to be proud of and this past season where we won all three trophies we competed in has given the squad great confidence going into 2014.”

Cricket Ireland Performance Director Richard Holdsworth paid tribute to the WICB for the invitation: “We’re extremely grateful to the West Indies Cricket Board for this opportunity. It will give the squad exposure to a high standard of competition which is vital as we prepare for the 2015 World Cup.”

All Ireland’s games will take place at the Queen’s Park Oval in Trinidad, with Guyana their first opponents on January 31. Their second fixture is The Windward Islands on February 3, while their group stage concludes against Jamaica on February 8.

The semi-finals take place on February 12 and 13, with the final down for decision on the 15th. A young George Dockrell at the 2010 ICC World Twenty 20 in the Caribbean.