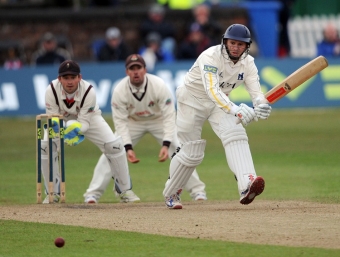 Ireland Captain William Porterfield has signed a new two-year contract extension with Warwickshire CCC to commit to the current LV= County Champions until at least the end of the 2015 season.

Aged 28, the Londonderry-born batsmen has made 72 appearances for the Bears in all competitions since arriving at Edgbaston from Gloucestershire ahead of the 2011 season, with his List A performances being particularly impressive. Last season 395 runs at an average of 39.5 were a key contributor to the Bears’ run to the final of the Clydesdale Bank 40.

Dougie Brown, Warwickshire’s Director of Cricket, said: “Because of a reduced international calendar this is the first winter where we’ve seen a lot of William here at Edgbaston, and his attitude and commitment towards pre-season training has made a great impact on other members of the squad. He’s made great strides in the last few months and we had no hesitation in offering him a chance to commit himself to Warwickshire for the foreseeable future.

“His opening stand with Varun Chopra (67 runs out of a partnership of 126) in the CB40 semi-final at Old Trafford demonstrated his maturity and ability to perform on the biggest stage. His challenge is to do this consistently across all formats of the game and prove himself to be one of the leading batsmen in the domestic game.”

Porterfield was appointed Captain of Ireland in 2008 and has scored five ODI centuries to date and played in two ICC World Cups and three ICC World t20s. He became the first Irish player to score 1,000 runs in a domestic season in his debut season at Gloucestershire and boasts a career best First Class score of 175, for Gloucestershire against Worcestershire in 2010.

Commenting on his new deal, William said: “I’ve had two fantastic seasons already with Warwickshire and with such a strong squad and a great chance to win more silverware, it was an easy decision to extend my stay here at Edgbaston.

“The majority of the squad has been playing together for a few seasons and we’re all really looking forward to competing for more honours in the new season.”