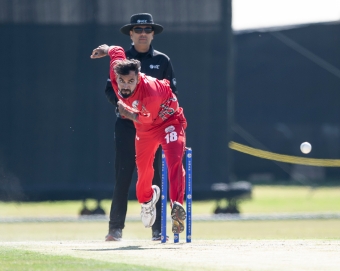 MUSCAT, Oman – Ireland Men’s cricket team has fallen to a slick Oman side by 43 runs in today’s T20 International at the Al Amerat Cricket Ground in Muscat.

Ireland captain Gary Wilson won the toss and chose to bowl first, with only one change made from yesterday’s winning side – Boyd Rankin rested and Stuart Thompson coming in. The home side started poorly losing opener Khawar Ali for a duck from the third ball. Despite some big hitting from Aqib Ilyas (21) and more patient batting from Jatinder Singh (40), further early wickets fell and Oman was 42-3 in the 7th over.

An 83-run fourth-wicket partnership between Singh and Aamir Kaleem (46) allowed Oman to build a defendable total, but late wickets restricted their batters and they finished on 173-9 from their 20 overs – with the 14 runs from the final four balls of the innings giving their final score a late boost. Mark Adair’s bowling threatened throughout (2-28) and Stuart Thompson’s 2-21 was his side’s most economical return.

Ireland’s response started confidently, despite the early loss of Paul Stirling (4). Kevin O’Brien’s 39 from 16 balls was looking to take the game away early from Oman, supported by Andy Balbirnie’s 19 from 13 balls, but a rash of wickets saw Ireland stumble from 54-1 to 109-8 by the end of the 13th over.

Much of the damage was done by Mohammad Nadeem who grabbed 3-14 from 4 overs through the middle overs, putting the brakes on any Irish thoughts of a late charge. A late innings of 18 from Adair only served to put respectability in his side’s score, and when the final wicket fell, Ireland were 43 runs short of Oman.

While the result brings the Irish side back to earth after yesterday’s confident win, Head Coach Graham Ford will be pleased with some patches of play – Mark Adair’s early bowling, Kevin O’Brien’s contribution at the top of the order, and the young players continuing to look comfortable playing at this level – but he will be looking for the side to take the learnings out of this match into their next two encounters against Hong Kong and Nepal. All games will be seen as providing important experience ahead of the all important ICC T20 World Cup Qualifier that starts in less than a fortnight.

Oman now go top of the series table with two wins from two, and Ireland currently sit second. Ireland’s next game is tomorrow against a Trent Johnston-coached Hong Kong side at the same venue, starting at 11am (Irish time).