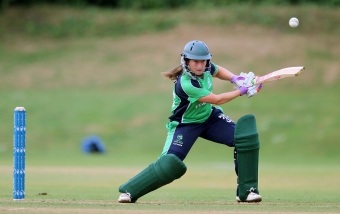 Isobel Joyce returns to the Ireland Women’s squad for the ICC European Division One T20 Championships being held at Rugby next month (August 12-17).

The Merrion all-rounder has been on a short break from the Ireland team, but is back at the helm to help Ireland defend the trophy they won at Bready in 2012.

“It’s always good to have a spine of experience in the squad, and we get that with Isobel and Clare Shillington,” said Ireland coach Trent Johnston.

“Mary Waldron has done a superb job leading the squad in the County Championships, and we’ve appointed her vice-captain on a permanent basis to deputise for Isobel when she’s missing.

“There’s a great buzz about the squad who’ve continued to work hard since the T20 World Cup in Bangladesh. We’re starting to develop strength in depth which maybe hasn’t been the case in recent years, but you can see that from the players who’ve missed out on selection this time.

“There’s no doubt that both Scotland and The Netherlands have improved in the last year, so we’ll have to be at our best to win the trophy. Having said that, if we play to our full potential, I’ve no doubt we’ll be successful again.”

Joyce and Clare Shillington are the two players included in the squad of 13 to have won over 100 caps. There is also a nice sprinkling of youth with four teenagers in the ranks - Gaby Lewis, Elena Tice, Lucy O’Reilly and Kim Garth.

Ireland warmed up for the tournament with an emphatic 102 run win over Durham in their first game in the ECB Twenty20 competition yesterday thanks to a brilliant unbeaten 113 from Shillington. Ireland were just pipped by Lancashire in the second game, where Mary Waldron top scored with 33 and Elena Tice claimed three wickets.