Ireland start Euros with a win over Netherlands 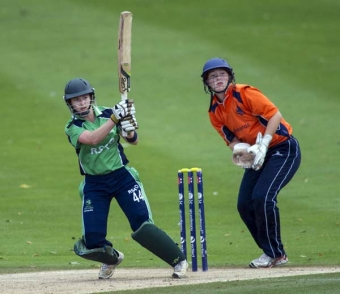 Ireland got the ICC European Championships off to a winning start with a 32 run win over the Netherlands at Rugby School.

Cecelia Joyce continued her fine run of form with the bat for Ireland, scoring 58 off 51 balls at the top of the innings after Clare Shillngton was bowled by Braat (2-14) off the first ball of the game.

Joyce combined well with Mary Waldron (29) as the pair added 91 for the second wicket before Waldron was bowled by Kalis. Once Joyce was out with Ireland on 100-3, Isobel Joyce (13) and Laura Delany (10) kept the score moving and Ireland finished on 132-5 off 20 overs. Kim Garth struck with the second ball of the Netherlands’ response, bowling Veringmeier. Her opening partner Esther de Lange played well for her 53*, but her partners couldn’t keep up with the required rate as, following a short rain break, the Netherlands ran out of time 33 runs short of their target.

Elena Tice and Laura Delany picked up a wicket each, while Shaunagh Kavanagh claimed a run out. Speaking to www.cricketireland.ie following Ireland’s victory, Ireland coach Trent Johnston was happy with the win, but feels Ireland still have more in the tank: “It was a good way to start the campaign, it certainly wasn’t our best performance of the season, but a win is a win. Ceil and Mary batted well and all the bowlers did their job. Big game against Scotland tomorrow.”

Ireland’s star with the bat Cecelia Joyce told www.cricketireland.ie  that Ireland’s victory was down to the squad’s positive approach: “Today was a solid all round performance from the whole squad. With the firepower coming in behind us in the batting line up it gives us freedom up front to play aggressively and to take the bowlers on.

“We’re trying to play a positive brand of cricket and I certainly feel like we did that today. We put a decent total on the board and the bowlers backed us up.”

Ireland continue their ICC European Championships campaign tomorrow when they take on Scotland at 10.30am - live scoring of that match will once again be provided by CricHQ.