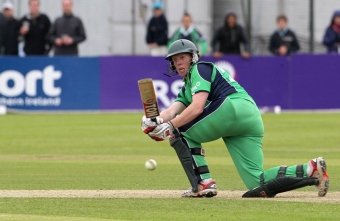 Ireland once again underlined their ability to compete with the heavyweights of world cricket as they came agonisingly close to recording another famous victory over Pakistan but in the end had to settle for a tie in the first One-Day International in Clontarf on Thursday.

Paul Stirling’s second successive century against Pakistan got Phil Simmons’ side off to the perfect start in their pursuit of 276 for victory before Kevin O’Brien’s explosive innings of 84 meant the game went into the final over.

However, with the ball in the hands of Saeed Ajmal and fifteen required, Ireland probably felt they had missed the opportunity of another famous scalp but O’Brien hit the off-spinner out of the ground before sweeping the last ball to the boundary to ensure the spoils were shared.

Pakistan will breathe a huge sigh of relief as they narrowly avoided another defeat to the associate nation when they seemed to be in command at the innings interval. Mohammad Hafeez’s fifth one-day century put his side in the ascendancy as he smashed fourteen fours and two sixes on his way to an unbeaten 122 while sharing a second wicket partnership of 188 with Asad Shafiq.

Having won the toss, Pakistan skipper Misbah ul Haq opted to bat first as his side continued their preparations ahead of the Champions Trophy and made one change to the team that beat Scotland in Edinburgh with Shoaib Malik replacing Umar Amin.

However, openers Imran Farhat and Nasir Jamshed made a watchful start in bowler friendly conditions as Trent Johnston and Tim Murtagh beat the bat on the countless occasions during a rain interrupted morning session.

After breaking the shackles with a massive six off Johnston, Jamshed was forced to retire hurt with a back injury before three more heavy showers meant the game was reduced to 47 overs per side.
Ireland got the breakthrough their tight start had merited as Farhat edged Alex Cusack to Stirling at first-slip for nine in the twelfth over. But, the wicket only brought Shafiq and Hafeez together at the crease as the pair went about rebuilding their stuttering innings with a superb second wicket partnership which contained some deft shots and power hitting.

Shafiq fell sixteen runs short of his ton as the hosts halted the Pakistan momentum somewhat with a couple of late wickets. Cusack and Kevin O’Brien both picked up two wickets but were expensive as Ireland were set a victory target of 276.

Not even seven foot left-armer Mohammad Irfan could put Stirling off his natural game as he put on fifty with William Porterfield (19) before the Irish captain miscued Hafeez to mid-wicket.

The Middlesex batsman then went onto smash thirteen boundaries on his way to 103 and his departure in the 35th over seemed to signal a switch in momentum but O’Brien played the type of innings which he’s now accustomed for to bring Ireland back into the game. The all-rounder scored 84 off just forty-seven balls but admitted the result feels like a defeat as victory was within their grasp.