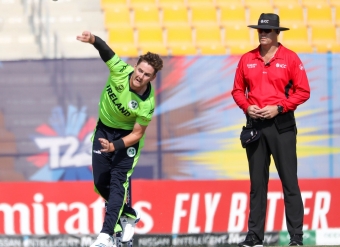 DUBAI, UAE – Having automatically qualified for the ICC Men’s T20 World Cup by topping Group B in the Qualifier tournament, the Ireland Men’s cricket team’s next match is the semi-final of the competition – with the side not satisfied with qualification alone, but determined to win the overall title.

Six sides from the T20 World Cup Qualifier tournament progress to the World Cup in Australia next year, with automatic qualification being handed to the two teams who topped their respective Groups. After a dramatic climax to Group B fixtures, Ireland held top spot on Net Run Rate and thereby progress to the World Cup tournament – however, that does not end their competitive involvement in the Qualifier event. A semi-final (and a potentially a tournament final) is still ahead for the men in green, and they are not satisfied to just sit back having achieved qualification.

“We did our job in the last two games, put the pressure back on Oman to get a result and, fortunately, Jersey did us a favour. It’s great that we can look forward to another World Cup but nothing has changed. I said at the start of the tournament the objective was not just to qualify but to win it and we will do that if we play our best cricket on Friday and Saturday.” The side has relocated from its previous base in Abu Dhabi and have moved to Dubai where ahead of their semi-final clash on Friday against the Netherlands at the Dubai International Stadium. The match will begin at 2.10pm (local time) or 10.10am (Irish time).

One of the stars of the tournament for Ireland has been 23-year old Mark Adair. Having only made his international debut in May 2019, Adair has had an impressive start to his senior career – an eye-catching debut performance against England in an ODI, six wickets on his Test debut at Lord’s and now leading the line at the World Cup Qualifier taking 10 wickets at an average of 11.

Speaking from the team hotel, Adair was talking about that nervous 24-hour period awaiting results that would eventually see Ireland seal top spot and qualify:

“Yeah, it was closer than what we wanted, but Jersey did us a nice favour there and we managed to top the group. To be honest, it wasn’t a great 24 hours, you’d rather win all your games and qualify conventionally - to control your own destiny, but it’s not the way we did it this time around. It was a pretty strange feeling to be watching and supporting another team because you know they have such an effect on your standing. But, thank you Jersey.”

Asked about his own performances, he said:

“My bowling has been good, the ball has been coming out pretty well and it was a pretty simple game plan we had which helped us out there. I was disappointed with my batting performances but we have another two games left to maybe try and get that right.”

Asked about the feeling in the squad, he said:

“There’s a lot of lads in the squad with this being their first trip, and they’ve been playing with no fear of failure, so that has brought a lot of positivity to the group.”