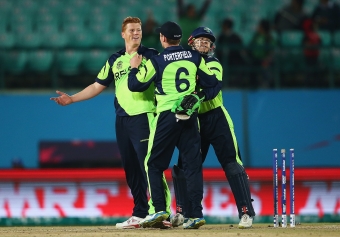 Ireland have confirmed they will host Afghanistan in a five match One-Day International Series in July.

It promises to be one of the busiest summer campaigns on record for the Irish with the ground breaking series against the Afghans - it will be the first time they will have played a five game series.

In addition they are scheduled to host two home ODI’s apiece against Sri Lanka and Pakistan, with away ODI’s against Australia and South Africa confirmed for September.

“We’re certainly getting close to the amount and variety of fixtures we need to continue our international development,” said Cricket Ireland Head Coach John Bracewell.

“The more games we play in varying conditions the more we learn and grow as a cricketing nation. I expect the five game series against Afghanistan will be tough and fiercely competitive.

“They had an excellent series win in both ODI’s and T20 against Zimbabwe last year, and continued that form in the World Twenty20 bating the eventual champions West Indies, which was a fantastic achievement for them and the Associate cricket cause.

“It’ll be a new experience for the players to be involved in a five game series but one which I’m certain they’ll relish and thrive on.”
Cricket Ireland Peformance Director Richard Holdsworth welcomed the contests and also revealed that a reciprocal series will be taking place in India early next year. “We are really looking forward to hosting the Afghan team in what have become great contests between well-matched teams,” said Holdsworth.

“Being ranked 10th and 11th in the ICC ODI rankings should ensure hard-fought matches and we hope the Belfast public comes out in strong support of the home team.

“In addition, we shall be visiting Afghanistan’s new home of international cricket in Delhi early next year, when we are due to play our ICC Intercontinental Cup match.

“We have also agreed to stay on longer and play an ODI and T20I series with them, which will not only continue our close rivalry, but also count towards qualification for the Cricket World Cup in 2019.”
The teams have played four ODI’s to date, with Ireland winning three and Afghanistan one. Their only ODI meeting on Irish soil came in the World Cricket League Championship in 2012 which saw Ireland win by 59 runs thanks to a half century from Ed Joyce.

Ticketing and pricing details for the series will be announced on www.cricketireland.ie in due course.