Ireland to tackle Series-leaders Bangladesh, as Tildenet signs on for another year 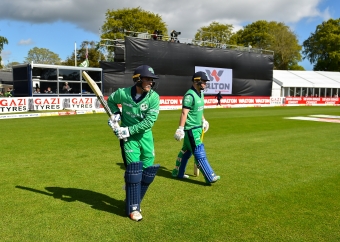 DUBLIN – Ireland Men’s international cricket team will face series-leaders Bangladesh in the last round-robin match in the Walton ODI Tri-Series 2019 at Clontarf, looking for a positive finish to the competition.

After scoring their fourth highest one-day international tally against West Indies last Sunday, the men in green saw the visiting side overhaul their score with five wickets in hand.

“It’s a bitter pill to swallow, we felt that we got it right with the bat today and we were good with the ball last week, we need to just try to put them all together.”

The home side has one last opportunity to get that batting and bowling combination right in the Series, before it re-groups and heads to Belfast for a two ODIs against Afghanistan, starting on Sunday.

While the Irish side missed out on facing Bangladesh earlier in the Series after the match was abandoned due to rain, one of the current senior squad did recently have an opportunity to face the Bangladeshi’s when they took on the Ireland Wolves 10 days ago and perhaps offered a blueprint for how to combat the visiting side’s bowling attack.

James McCollum, the Northern Knights and Waringstown top-order batsman, not only faced Bangladesh but capitalised on the opportunity by scoring 102 from 109 balls. He said of the innings:

“The Wolves innings against Bangladesh was a great opportunity, it gave me a wee bit of a feel for their attack, as well as an opportunity to feedback to the other batsmen in the senior squad.”

“For a few days leading up to the game I’d studied quite a lot of footage of their bowlers - and we’d actually played against some of their attack in the Bangladesh A series last year when they came over - so I had a rough idea what to expect and how I was going too approach each bowler.”

“That innings was a case of being watchful early on, as we knew it would do a bit when the seamers put it in the right place, then trying to capitalise when they missed their line and length. They have obviously got some very experienced spinners in those middle overs, so the plan was to milk them as much as we could, before taking advantage of the pace as much as possible when they came back on in the middle overs.”

“Being a bit critical, I probably left a few runs out there getting out with 12 or 13 overs to go, but its always great when it comes off and it was such a good win for the boys, it was a pretty big scalp for what was one of the strongest wolves sides I’ve been involved in.”

McCollum is part of the 14-man squad that is available to Graham Ford for tomorrow’s encounter. The squad being:

The match starts at 10.45am, Wednesday 15 May 2019 at Clontarf Cricket Club. Tickets available at the gate.

In further news today, Cricket Ireland announced the one-year sponsorship extension of Tildenet – further consolidating a partnership that is entering its eighth year.

Tildenet is one of the UKs fastest growing textile manufacturers and renowned as one of the most innovative netting companies in the world.

“The partnership with Tildenet has been an enduring one that sees the company investing in Irish cricket through the provision of nets and covers. As a further commitment, Tildenet also sponsors the Club of the Year Award at the annual Cricket Ireland Awards and provides preferential product rates to cricket clubs in Ireland looking to purchase anything from cricket nets, practice cages, sight screens, ground and rain protection and accessories. We welcome the news of the further extension and see it as a sign of confidence in the Cricket Ireland brand and the sport in this country.”

“This is our eighth year supporting Cricket Ireland and sponsoring Tildenet Club of the Year, of which we are very proud. We have just spent a delightful time in Dublin for the Ireland v England ODI. Now we are looking forward to seeing the men in green changing into men in whites for the Test match at Lord’s in July.”