Ireland U19 lose by 7 Wickets to England U19 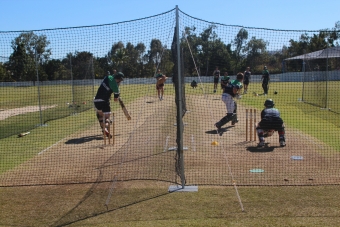 Ireland hard at work in the lead up to today's match

Ireland Under 19 lost their opening fixture in the ICC Under 19 Cricket World Cup against England Under 19s by seven wickets after collapsing from 94 for 5 to 109 All Out.

England bounced back from its loss to Australia on the opening day of the tournament to beat Ireland by seven wickets. The Irish batting line-up failed to fire with the English bowlers making light work of its top order, dismissing the side in the 42nd over.

Tyrone Kane (28) and George Dockrell (26) were the best of the Irish batsmen, contributing over half of the modest total of 109 set for England to chase. Most frustratingly for Ireland they were bowled out in the 43rd over with nearly 8 overs left to bat going unused.

Left-arm quick Reece Topley was dynamic with the ball, finishing the day with the impressive figures of three for 14 from nine overs to later collect the player of the match award.

England lost its openers early as Graeme McCarter and Andy McBrine struck to give Ireland some hope. But the Irish bowling attack could not stop England from patiently chipping away to surpass the total in the 36th over. Ireland’s bowlers did their very best to try and defend their total with the spinners George Dockrell (0-22 from 10), Andy McBrine (1-19 from 6) and Adam Coughlan (0-24 from 9) bowling with great control.

Next up for Ireland is the hosts Australia on Tuesday morning in what is a must win match if Ireland hope to progress to the next round.