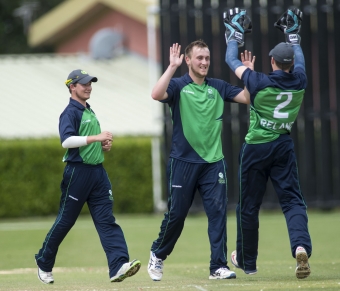 Ireland have made two changes to their squad for the ICC U19 Cricket World Cup Qualifying tournament in Malaysia next month.

The repechage event will feature five teams battling it out for the final place at the U19 World Cup in Bangladesh early next year.

“We played some excellent cricket at the European qualifiers in Jersey this summer, winning five of our six games,” said U19 coach Ryan Eagleson. “Unfortunately we fell at the final hurdle, losing to Scotland in the decisive final game. That was a bitter pill to swallow - missing out by virtue of NRR, but this event gives us a chance to rectify that.

“The tournament will be a tough one, especially with the hot and humid conditions we’ll encounter. I’ve been there five times as a player and coach, so know exactly what’s facing us, and the players will be well prepared.

“We are planning to arrive early and have lined up a few practice matches against local opposition which will help greatly with the acclimatisation.

“We’ve decided to make two changes to the attack, with Varun Chopra and Josh Little coming in. Varun has had an outstanding season at domestic level helping Coleraine to the Premier title, and bowling superbly for both our European title winning U15 and 17 sides. He’s an exciting prospect who we have high hopes for.

“Josh too has enjoyed great success with both the U15 and 17 sides. He’s been a regular feature opening the bowling for Pembroke in Division one and gives the attack some variety with both his extra pace and the fact he’s a left-armer.

“It was fantastic to see most of the top order get their chance in the Hanley Energy Inter-Provincial Series this summer, and I’m confident the batters will acquit themselves them well in Malaysia.”

Ireland will compete against Papua New Guinea, USA, Uganda and Nepal in the five-team event, with the final scheduled for October 22.