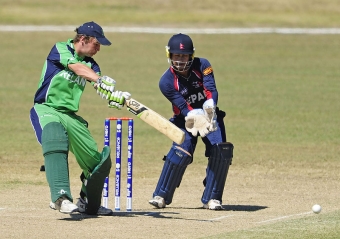 Andy McBrine made a crucial 41 © ICC/Getty

Ireland Under 19’s got their first win at the 2012 ICC Under 19 Cricket World Cup as they scored a tight 14 run win over Nepal. Despite this win, Ireland are likely to finish third in the group and will enter the plate stages of the competition next week.

Ireland batted first for the third match in the row as they won the toss at Endeavour Park in Townsville. Peter Chase and Scott Campbell came into the side for their first games of the tournament with Barry McCarthy and Patrick Tice sitting out which meant Robin Kelly took the gloves. It didn’t help Ireland’s batting troubles which continued as Nepal reduced them to 35 for 3. It was Ireland’s middle order that got Ireland up to a competitive total as firstly Andy McBrine (41) and Shane Getkate (47) came together in a partnership of 81 and Tyrone Kane batted throughout the rest of the innings to finish with 39 not out and help Ireland bat their overs to finish with a competitive 185.

Ireland’s strength throughout the tournament has been their bowling and their fielding as a unit and this morning was no different as they pressured Nepal’s batsmen throughout their chase. George Dockrell continued his exceptional world cup with the remarkable bowling figures of 10 overs 3 maidens 4 wickets for just 22 runs as he accounted for 3 of Nepal’s top 4 batsmen. He may have been the stand-out bowler but all 7 bowlers used contributed well and wickets continued to fall regularly as Adam Coughlan (2 for 39 off 10) and Graeme McCarter (2 for 31 off 7) continued their good world-cups as well. Tyrone Kane took the final wicket that sealed the win by just 14 runs.

Ireland’s next match is likely to be next Sunday or Monday in the plate section of the competition where they will need to win the plate to improve on their 10th place finish in the 2010 Under 19 World Cup.

The full scorecard can be viewed here

Ireland U19 v Nepal U19 gallery