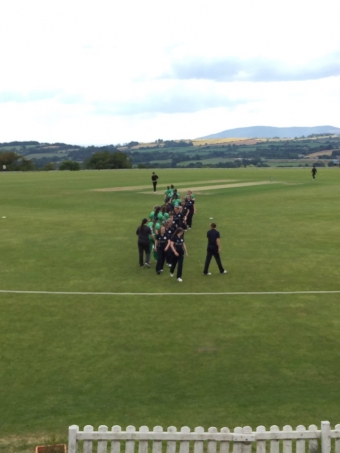 Ireland Under 17s defeated Scotland by 43 runs in a T20 at Oak Hill yesterday to secure the Celtic Cup after three wins out of four this week.

Orla Prendergast’s 49 and 47 not out from captain Lucy O’Reilly propelled Ireland to 168/3 off their twenty overs.

Despite 59 from opener Bryce, the Scots were kept behind the rate by a tight bowling display from the Irish attack.

Cara Murray took 1-23 from her 4 overs, Aoife Beggs went for just 23 runs off her 4 overs and Orla Prendergast took one for 20 off her three overs to go with her 49. Sadhbh Breslin finished the Scottish innings taking 2-5 off her single over.

All in all it added up to a comfortable 43 run victory in the sole T20 of the series.

It was an excellent response from the Under 17s after they slipped to defeat on Thursday in the third 40 over match, after winning the first two.

Opener Leah Paul carried her bat with 28 not out as Ireland were bowled out for 80. They showed outstanding heart and fight to take the chase to the final over. Scotland Under 17s chased the target of 81 but not before losing 7 wickets and being pushed all the way.

It was an excellent week’s cricket at Oak Hill in Wicklow. Ireland won two of the three 40 over matches and the only T20 match to capture the Celtic Cup.

There were outstanding performances, including a century and 5-17 in Tuesday’s win from Orla Prendergast. However, the learnings taken from a week’s international cricket will really stand to this talented and exciting group of young cricketers.