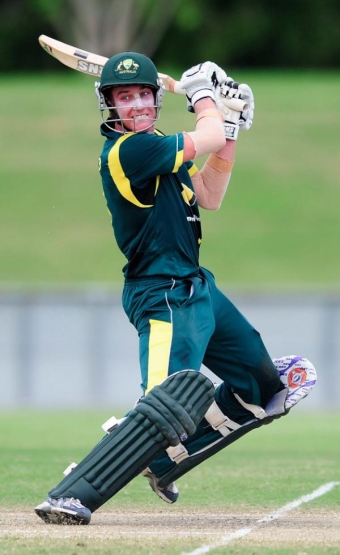 Ireland were left to rue an almost carbon copy batting collapse this morning in Townsville against the host nation Australia to leave them with a second defeat in two games in Group A of the ICC Under 19 Cricket World Cup in Australia.

Ireland started much more positively having won the toss and deciding to bat first. Robin Kelly and Ryan Hunter moved comfortably along to 33 in the seventh over when Kelly was caught for 11. This began a regular stream of Irish wickets first from South Australian fast bowler Alex Gregory who got rid of both the openers and Jason van der Merwe before leg-spinner Shane Cassell (3 for 24) sparked a mid-innings collapse just when it looked as though Shane Getkate, who scored 16, and Tyrone Kane, who scored 21, were going to spark a recovery. It was a similar story Ireland’s first group game against England as Ireland collapsed today from 108 for 5 to 129 All out.

Ireland fought brilliantly in the field and with the ball and it was anything but a straightforward chase for the hosts as they were reduced to 45 for 3 with spinners George Dockrell and Andy McBrine again bowling outstandingly. Australian Captain Will Bosisto (36 not out) came together with Travis Head, who scored a quick 25, and then Sam Hain who finished with 26 not out to ensure there was to be no upset as Australia ran out deserving winners by 6 wickets. Yet again though Ireland will be very disappointed that they were bowled out inside 43 overs and left more than 7 overs unused.

The win ensured that Australia will finish on top of the Group A table whilst Ireland are almost certain to contest the plate stages of the competition following their final group game against Nepal.

The full scorecard can be viewed Here