Ireland Under 19’s Depart for Australia 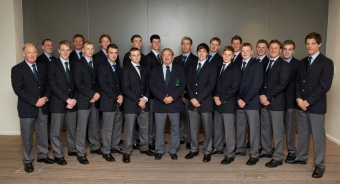 George Dockrell was in ebullient mood as the Ireland Under 19 squad flew out today from Dublin Airport ahead of the ICC Under 19 World Cup, which takes place in Australia from August 4-26.

George Dockrell flew back into Ireland this morning, having helped Somerset qualify for the T20 finals day in England yesterday evening. before jetting out to Australia with his Irish Under 19 team mates for the 2012 ICC Under 19 Cricket World Cup.

Dockrell is confident Ireland can put in a strong showing despite being drawn in a difficult group: “We’ve trained hard since securing qualification last August, and I’m hopeful we can emulate the senior squad in pulling off at least one major surprise. The squad has a number of talented all-rounders and if we perform to our capability there’s no reason why we can’t emerge from the group stages.”

Cricket Ireland President Arthur Vincent passed on his good wishes to the squad at the airport saying: “I’m sure the boys will do all the country proud in Australia and they will be magnificent ambassadors for our wonderful sport. The whole of Irish cricket is behind them and hopefully they will give us something to cheer about as we follow their progress in yet another World Cup for cricket.”

Following a week long training camp in Darwin, Ireland will play warm up games in Brisbane against Afghanistan and Sri Lanka. The tournament proper gets under way for them on August 12 against England and they go on to play further group games against hosts Australia and Nepal. From there it will be the top two teams in the group that will progress to the knock-out stages of the tournament whilst the bottom two will enter the ‘plate’ section.